COP27: No adaptation if the risk isn’t perceived

So far, discussions at this year’s United Nations Climate Change Conference (COP27) have mostly focused on mitigation (reducing greenhouse emissions), while attention to adaptation (coping with impacts) has lagged, both in terms of priority in agenda and amount of investment. The diplomacy, mechanisms, and measures for adequate adaptation to increasing climate-driven impacts (that is, climate adaptation governance) remain ineffective, globally, but especially in developing countries. One key aspect of adaptation is how associated risks are perceived. Though this varies between countries, thanks to the availability of different global datasets it is possible to draw some insights on the relationship between governance, awareness of climate change and perception of associated risks.

The Climate Perceptions Index (CPI) is a new tool and part of Meta’s Data for Good platform. It uses data from a global online survey of Facebook users. The Index was developed by a team at the Social Progress Imperative (see their methodology) to provide insights in three key domains: people’s awareness of climate change, perception of related risks, and commitment to climate action. The survey has also been presented by the Yale Climate Change Communications Program (more information here).

The Worldwide Governance Indicators (WGI) aggregate indicators from over 30 established data sources to evaluate six dimensions of a country’s governance. The WGI assigns scores for: Voice and Accountability, Political Stability and Absence of Violence/Terrorism, Government Effectiveness, Regulatory Quality, Rule of Law, and Control of Corruption. As these two datasets are surveyed globally, information is available for by-country comparison.

For this study, we plotted the country scores on the three CPI dimensions with the scores for the various governance dimensions provided by WGI. This allows us to draw insights on how both governance and climate perceptions are key for collective efforts to mitigate and adapt to the challenges of climate change. A few words of caution. First, we cannot speak about causality; we only observe the relationship between the variables, although we suggest underlying reasons for some of the relationships we observe. Second, while the datasets may inherently have a bias – this is especially true for the CPI, where the respondents are self-selected users of a social media platform – we believe their unique content outweighs this limitation.

The data indicate that countries which show better performance on governance (across the WGI’s indicators) show higher levels of people’s awareness of climate change. Broadly, people understand that climate change is a real phenomenon and that it is happening, they acknowledge it is caused mostly by human activities and they report hearing about it at least once a week. We find the relationship between awareness and good performance in governance to be statistically significant for all the WGI’s governance dimensions (p<0.0001), but it is the strongest for Voice and accountability (R-squared 0.64).

This might reflect that people in better-governed countries are likely to have easier access to scientific knowledge, and their governments do not appear to censor information or discredit scientific findings. These countries might have also incorporated some aspects of climate change in the public administration apparatus – whether in education or environmental impact assessments. 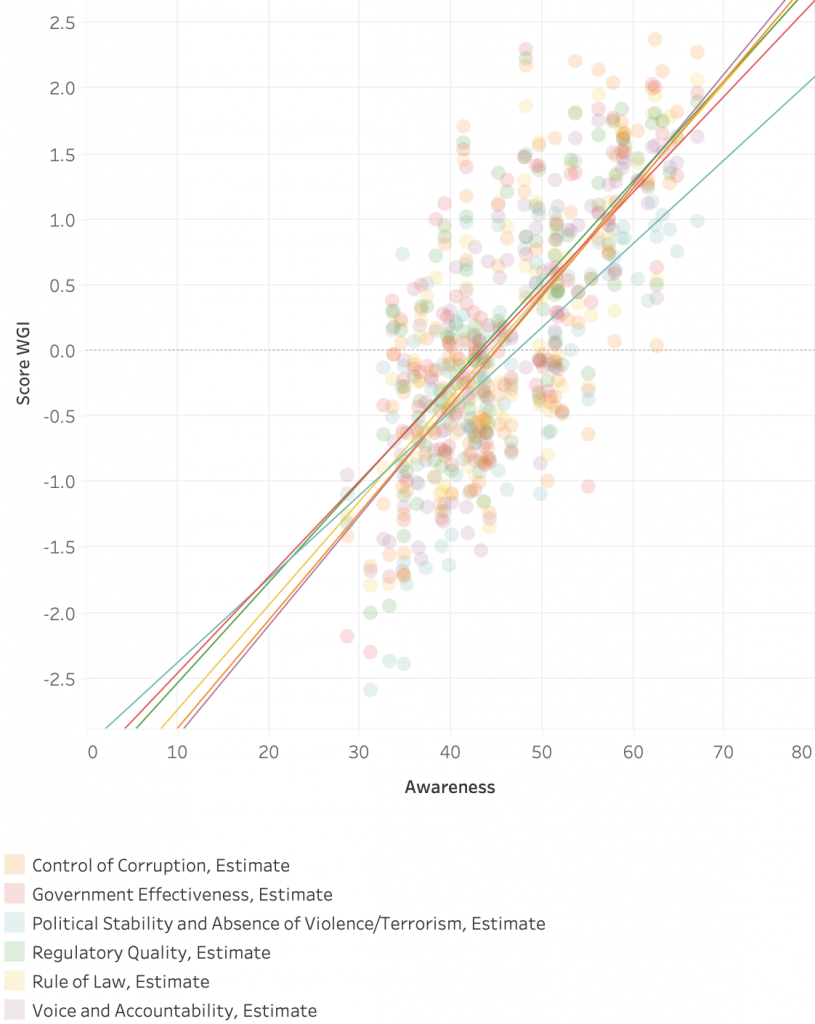 Figure: Quality of governance scores vs awareness of climate change, for 107 countries.

In the figure, the horizontal axis represents the CPI Awareness component, scaled 0–100 (lowest to highest awareness). The vertical axis represents the WGI scores, ranging approximately from -2.5 to 2.5 (z-score standardised). Dots represent individual countries’ positions on each variable. CPI is available for 107 countries, while WGI covers more than 200 countries. Data for WGI are from the project’s September 2022 update and reflect the most recent year – that is, 2021.

This means that, despite knowing about and understanding climate change, many people appear not to worry about its impacts, or to feel personally at risk of being harmed by it, and they do not consider it a serious risk to future generations either. At the global level, climate change seems to be perceived as a somewhat serious problem rather than an existential threat to deal with. This shows there is huge room for improvement, as no proper adaptation can be reached if awareness does not translate into risk impact perception.

To change this situation, local governments should work on the psychological distance (closeness) of climate change, one of the main determinants of risk perception. Psychological proximity is a measurement of how close or far away and how concrete a person perceives a threat to be. It considers temporal, spatial, and social distance. If risks are perceived as distant, this becomes a barrier to taking action. Awareness initiatives that allow people to sense more closely, clearly and vividly climate change impacts locally, like this AI Google Street filter, are good starters.

One of the explanations of this perception gap could be the misleading idea that disasters are natural and hence, there is not much to do within our reach. But as evidence clearly shows, the climate events the world has been experiencing in recent years are the result of human activity. The risk of being affected heavily by a given hazard or threat is directly related to the actions we take to reduce our vulnerability. It is up to us, as practitioners and decision makers, to align economic and urban development with sustainable social inclusion – that is, to practice vulnerability reduction-centered decision making. According to the UNEP’s recent Adaptation Gap Report, global efforts in planning, financing, and implementing adaptation have been “too little, too slow”. The aforementioned gap between awareness and perception could be one of the main reasons behind such insufficient progress.

In sum, besides securing commitment from states to provide much-needed funds to finance the net-zero transition and further adaptation capacities, during COP27 attention should be directed to how to improve risk perception at all government levels: local, state, and federal – in order to move from awareness of the existence of climate change to awareness of the associated risks. The path towards a sustainable future heavily depends on it.