The EU Treaty reform challenge: Is there a winning package?

There have been growing calls for the European Union (EU) to be reformed, to address the profound policy challenges Europe faces, from economic growth and inequality, to migration, climate change, and security and defence. These calls culminated in the Conference on the Future of Europe, which concluded in early 2022 with a proposal for a major institutional overhaul.

Treaty reform will not be easy, as all 27 member states will need to agree. To unlock a deal, previous reforms have been built on a “package” of institutional and policy changes, which has allowed member states and citizens to accept compromises on some issues in return for getting what they want on other issues. For example, the Single European Act (agreed in 1986) was based on a trade-off between more majority voting and more powers for the Commission and European Parliament in return for the single market programme (for parties mainly on the Right), new social and environmental policies (for parties on the Left), and a doubling of regional spending (for poorer member states).

To see what package of reforms might be acceptable this time, in April 2022 we conducted a survey of public attitudes towards EU institutional and policy reforms in 16 member states (Bulgaria, Croatia, Denmark, Finland, France, Germany, Greece, Hungary, Italy, Lithuania, Netherlands, Poland, Romania, Slovakia, Spain, and Sweden ), via YouGov’s online respondent panels. The sample sizes range from roughly 500 to 2000 per country.

We could have asked people in each country about their views on each reform issue, such as more majority voting or more EU action on climate change. However, asking about individual issues would not have enabled us to identify how the public would respond if asked to choose between different packages – such as a particular set of policy reforms in combination with a set of institutional reforms. So, instead, we conducted a ‘conjoint survey experiment’, a technique originally from market research which is now widely used in political science.

First, we identified six reform issues (3 institutional and 3 policy) as well as three possible options for each of these issues. We tried to keep the descriptions of the options as simple as possible, as Table 1 shows. 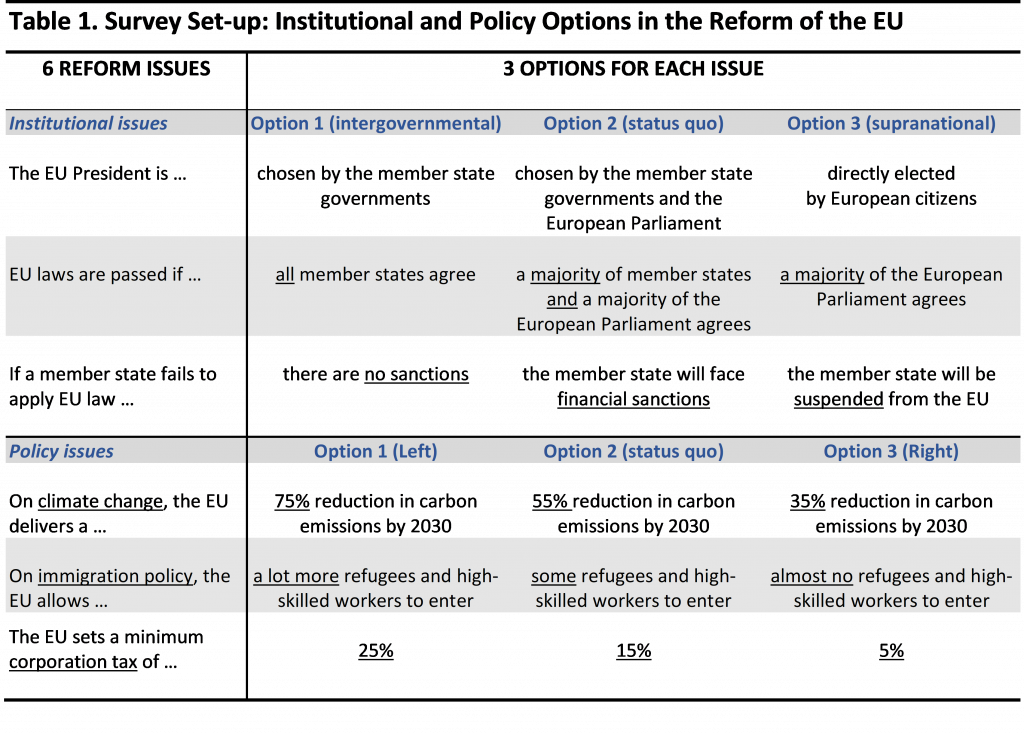 Second, we created all the possible potential ‘models’ of a reform, where each model contained one of the options on each of the six issues (729 models in total; that is 3 x 3 x 3 x 3 x 3 x 3). We then presented respondents with four randomly chosen pairs of models and asked them to say which of the two models they prefer. This set-up enabled us to identify the relative popularity of each individual institutional or policy choice and also how ‘powerful’ each reform option is in determining whether a citizen is likely to prefer one particular model of a reformed EU against another model.

What type reforms are important to people?

Figure 1 shows the overall results. Concerning institutions, EU citizens are relatively indifferent to how an EU President is chosen. They are also comfortable with the current way most EU decisions are made via a majority of EU governments and the European Parliament. We found little support for a more ‘intergovernmental’ model, where decisions require unanimity between the member states. We also found that how EU laws are enforced is a more salient issue. The public is more likely to choose a model that either suspends a member state or imposes financial sanctions for breaching rules, rather than a model where member states in breach of the law would not face sanctions.

Notably, people chose an EU model based more on the policy reforms it contains than on the institutional reforms. The public supports policy reforms that would enable the EU to tackle climate change faster, allow refugees and highly skilled workers to enter the EU and impose some minimum corporation tax rates. Less popular, however, are reforms that would change migration policies from the status quo or impose a uniformly high (25%) level of corporation tax. 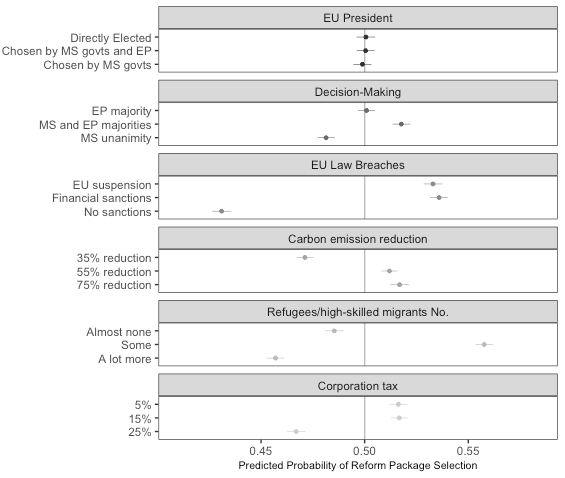 We found some differences between European regions. For example, people in North-western and Southern Europe are more supportive than those in Eastern Europe of majoritarian institutions (such as more powers for the European Parliament), and Southern Europeans favour faster action to tackle climate change. However, these differences are relatively small, and in general we found consistent attitudes across Europe.

Another element of treaty bargaining is how EU reforms relate to citizens’ ideological views. For example, where policy issues are concerned, do citizens on the Left want the EU to speed up action on climate change, allow more migrants to enter the EU and impose higher corporation taxes, while citizens on the Right want the opposite? And, do citizens on the Left and Right have different views of institutional reforms? Figure 3 shows responses according to where citizens place themselves on a Left-to-Right spectrum. (We counted those who chose 1, 2 or 3 on a 7-point scale as ‘Left’ and those choosing 5, 6 or 7 as ‘Right’.) 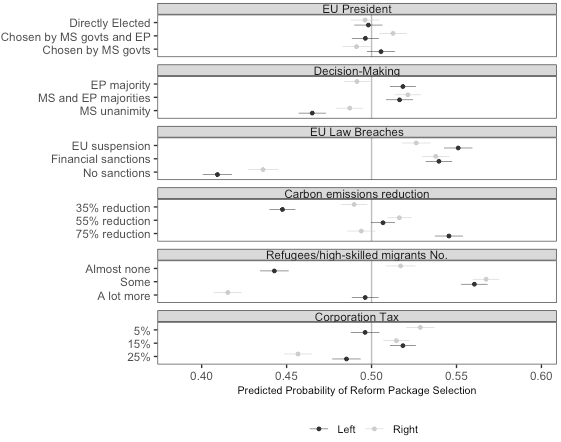 People on the Left are more opposed to unanimous decision-making and are more supportive of suspending a member state for breaching rules than people on the Right. But, ideology has a larger impact on policy preferences. People on the Right support the status-quo objective of reducing carbon emissions by 55 percent by 2030, more restrictive migration policies and a common 5-percent corporation tax rate. In contrast, people on the Left favour reforms that would lead to faster reductions in carbon emissions and a 15-percent corporation tax rate, yet they reject further immigration restrictions.

And the winner is…

Finally, we can assess the popularity of combined reforms, as Figure 3 shows. Put simply, on average, citizens support a more integrated EU, but are generally happy with the current set of EU policies. 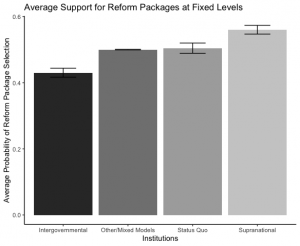 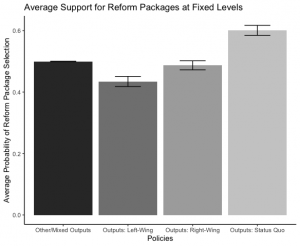 This final set of results presents a major challenge, though. Without widespread support for a new set of policy objectives, there is little that can be offered in policy terms to secure sufficient support for a major step forward in institutional integration.

Catherine De Vries is Dean for Diversity and Inclusion and Professor of Political Science at Bocconi University.

Simon Hix is the Stein Rokkan Chair in Comparative Politics at the European University Institute in Florence.

Miriam Sorace is a Lecturer (Assistant Professor) in Quantitative Politics at the University of Kent and a Visiting Fellow in European Politics at the London School of Economics and Political Science.