In praise of reality, not realism: An answer to Mearsheimer

On 24 February 2022, Russia invaded Ukraine. One theory that seeks to explain Putin’s actions stems from the school of offensive realism in International Relations (IR), which holds that states are aggressive power maximisers trying to extinguish any threats to their security. Promoting this approach, Professor John Mearsheimer (University of Chicago) claimed at a recent talk at the EUI that Russia had no choice but to invade Ukraine. The neighbouring country presented an existential threat to Russia because of its Western ties. This post clarifies why this narrative is misguided and misleading.

Mearsheimer’s central point is that US foreign policy was geared to transform Ukraine into a Western bulwark on Russia’s border – by pushing it closer to NATO, championing its EU integration and financing Ukrainian democracy. What is more, NATO itself continued to substantially arm the country and train its military over the years. According to this mono-causal narrative, the result was that Russia felt actively threatened like a “big bear feels when he is poked between the eyes.” This picture of a United States determined to bring Ukraine into NATO and committed to aggressive NATO expansion is not supported by facts.

The argument builds heavily on the NATO 2008 Bucharest Summit, where heads of state declared that Ukraine and Georgia would become NATO members (Art. 23). US President George W. Bush Jr. was the one advocating this position, but it was strongly opposed by France and Germany precisely because they worried about Russia’s security concerns. Neither Ukraine nor Georgia was offered a Membership Action Plan, nor did the declaration generate a NATO agenda focused on enlargement further East. In a recent interview, former German chancellor Angela Merkel stood by her decision to oppose a Membership Action Plan for Ukraine after 2008. Russia’s invasion of Georgia in 2008 did not galvanise NATO into spending more on its own military capabilities either, let alone on those of countries like Ukraine, Georgia or Moldova. US aid for Georgia after the invasion was focused on reconstruction and was not intended to include military aid.

During the Obama administration, the White House pivoted to Asia and reduced its attention to Central and Eastern Europe altogether. The idea of NATO enlargement towards the East was far from a priority. Language similar to that used in 2008 cannot be found in subsequent NATO summit declarations. It was not until Russia’s annexation of Crimea in 2014 that NATO member states (slowly and indecisively) realised the necessity to invest in securing the Eastern Flank. That agenda did not, however, include NATO enlargement further East. It has also lacked financial follow-through. Despite a commitment from all member states to spend 2 percent of their national budget on defense, by 2016 only five member states had met that target. By 2021, the number was still at just ten.

President Obama’s reaction to the annexation of Crimea was soft (the ‘no Cold War over Crimea’ speech, for example) and Republican Party leaders were ambivalent. While NATO decided to heighten its presence in Europe through joint training, enhanced troop interoperability and troop rotations (Warsaw Summit Declaration 2016), the cooperation with Ukraine entailed mostly medical, communication, cyber-defense and limited military cooperation. NATO summit declarations that followed the annexation of Crimea reveal NATO’s interest to maintain dialogue with Russia, and to moderate its aggressive stance towards its neighbours through diplomacy.

The annexation of Crimea did not convince all Western NATO states to increase their defense spending, but its Eastern members were rattled to the core. NATO’s Eastern Flank signed a joint declaration in 2015 aimed at redirecting more of the alliance’s attention to the region. Even for the Eastern Flank, NATO enlargement was off the table, as the text shows. Expert analysis published since then has confirmed little strengthening of the Eastern Flank between 2017 and today.

Interest on the part of the Trump administration to create a bulwark Ukraine and a Russia-hostile NATO is even harder to identify. President Trump admires President Putin. That bond continues to this day, even after the invasion of Ukraine. His lack of commitment to NATO’s Article 5 also created much angst among member states. During Trump’s impeachment process over Ukraine, we saw that the President’s interest in the region was more personal than geopolitical.

In short, while much of Eastern Europe was pounding at NATO’s door, they were often invited to knock more softly so as not to disturb the neighbours.

Mearsheimer’s argument also rests on the flawed reading of Russia as devoid of imperialist goals. In fact, for him, Russia is not acting but simply reacting. Yet Putin has turned to imperialism as a buttress for Russian authoritarianism, for which there are numerous accounts from experts working on the region (Shevtsova, 2014; Politkovskaya, 2003; Robertson and Greene, 2019; Snyder, 2022). Putin himself has referred repeatedly to the idea of a divided Ancient Russian World (Russkiy mir) and highlighted Russia’s aspirations to restore unity. In June 2021, he claimed that Ukrainians and Russians are one people and that Russia and Ukraine are a single country. He continues to compare himself to Peter the Great in justifying a quest to take back Russian lands. This shows that NATO’s presence in Eastern Europe is but a pretext for a colonising Russian agenda.

Not only area specialists argue this, but 64 percent of people sampled from 17 European countries in the recent EUI-YouGov poll (2022) agree that the war is solely or mostly Russia’s responsibility (see Figure 1). 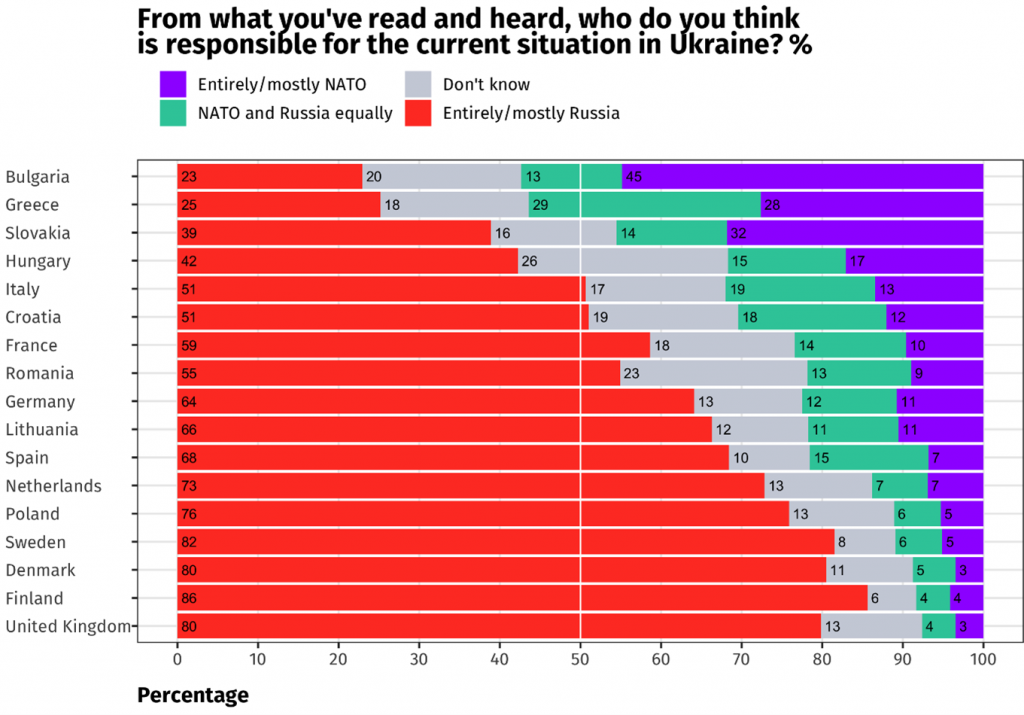 Figure 1. Europeans’ views on who is responsible for the situation in Ukraine. EUI-YouGov, 1-25 April 2022.

Endorsing the Mearsheimer view also requires ignoring the aspirations of East European countries. How should their security concerns and particularly those of Ukraine be weighed against those of Russia? Seeing Russia as a defense issue and security threat is now the view of the majority in nearly all the 17 European countries included in the EUI-YouGov poll. Indeed, opinions shifted strongly over the last year alone, from looking at Russia with goodwill based on trade and diplomacy to a much more distrustful position. Moreover, Europeans now believe more than ever that NATO is important to their national security (see Figure 2). 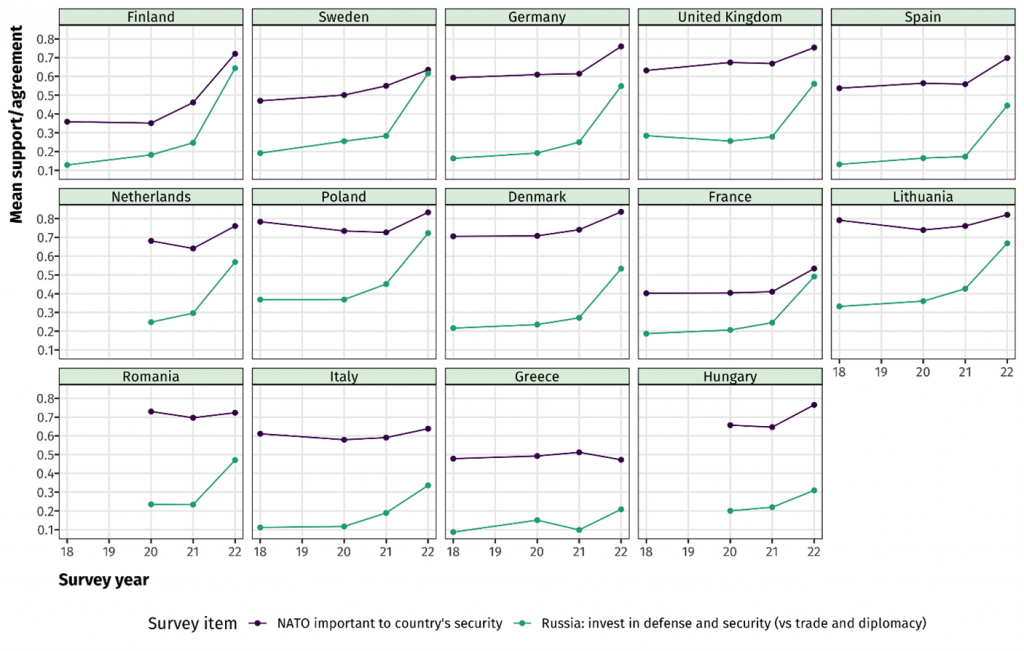 Figure 2. Europeans’ views on the importance of NATO and defence investments to their national security. EUI-YouGov, 2018-2022.

Perhaps most surprisingly, Mearsheimer overlooked in his presentation at the EUI not just Russian but also Ukrainian agency. Starting with the Orange Revolution of 2003–2004, continuing through the Maidan Uprising (2013) and into the Revolution of Dignity (2014), which led to the overthrow of the Russian-influenced government, the Ukrainian people expressed their desire for a democratic, European future, divorced from their authoritarian past. Ukrainians fought alone on the Maidan, without EU or NATO assistance. As the war of 2022 continues, we are all witnesses to the same struggles for freedom and dignity.

In many ways, Ukrainians and East European NATO member states have reasons to wish Mearsheimer were right in his view of history. US and NATO overcommitment to these countries and a peaceful, non-colonising Russian agenda sound great to East European ears. Unfortunately, this is a faulty vision – to which these authors hope to have contributed a correction.

Veronica Anghel is a part-time assistant professor and a Max Weber Fellow at the EUI and a Lecturer at Johns Hopkins University/SAIS. Her current research focuses on post-communist state building and European integration, particularly the effect of institutions and elites on democratisation. Her most recent publication is here.

Dietlind Stolle is James McGill Professor in Political Science at McGill University and currently a Fernand Braudel Fellow at the EUI. Her research interests include support for democratic transgressions, affective polarisation, political consequences of pregnancy, political participation, political and social effects of COVID, adaptation of Syrian refugees and the political role of gender identity.