Legacies of empire: Through the voice of war veteran Isaías

It was late September 2021 when I took the subway to the Disabled War Veterans’ Association (ADFA) headquarters, in Lisbon, the former ‘capital of the empire.’ I had been there before, interviewing and collecting information about the association and notably those members who fought in the Portuguese Colonial War. This was the conflict by which Portugal’s dictatorial regime – Estado Novo – tried and failed to keep its African empire intact. Lasting from 1961 to 1974, the war was fought between Portuguese forces and liberation movements in the three major territories of the empire: Angola, Mozambique and Guinea Bissau.

The objective when I started interviewing disabled war veterans was to learn more about their struggle for better welfare rights during the revolutionary period (1974–1976) after the fall of Portugal’s dictatorship in April 1974. Overall, I found, the veterans were successful: in contrast with the period of dictatorial rule, they obtained better rights, changed prevailing ideas about disability and moved the emphasis from charity to social and professional rehabilitation.

On that early autumn morning I was particularly interested in a less-known reality of the Colonial War. Waiting to meet me were four disabled African war veterans, each with different scars, different disabilities, but sharing misfortune and a life forgotten by mainstream history. The conversations I had with these men allowed me to rethink my research and re-evaluate the place of colonial elements in my project. My ‘simple’ story of Portuguese disabled veterans as a group, acquiring better welfare rights with the coming of democracy, turned out to be more complicated. What about the indigenous people who fought for the Portuguese? Did they too benefit from that welfare?

Apparently, they did not. When the empire that reached ‘from Minho [in western Portugal] to Timor’ ended, the consequences of colonialism did not vanish. One such consequence was that thousands of African men, recruited by the colonial power during the war (of some 800,000 men mobilised by Portugal, about 240,000 were natives from the colonies), were left behind in the new independent countries, in the precarious situation of having fought on ‘the wrong side’ of the conflict and lacking the support of the Portuguese state.

Coming from Guinea-Bissau, Mozambique and Angola, my interviewees are vivid representatives of the legacies of empire. Recruited by the Portuguese colonial military, all of them bore arms to defend the empire and to fight against their fellow Mozambicans, Angolans and Guineans. All were severely injured and carry different levels of disability for life. João and Isaías (the names in this account are pseudonyms) were recruited in Mozambique; Zeferino in Angola; and António in Guinea-Bissau. This post relates just one of their stories.

The testimony of Isaías

Isaías, age 73, was born in Mozambique and joined the colonial army in 1970. Before the war, he had no ‘proper job’, but worked for a Portuguese patrão (‘boss’ – a common colonial term). About conscription, he sounded resigned: “…. the Portuguese were in control. We had to comply … so, we entered military life…” The colonial authorities viewed indigenous soldiers like Isaías as important assets because they knew the territory better, they knew the ‘enemy’ better and they were better accustomed to the climate. And, importantly, they were cheaper. 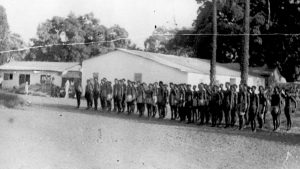 During a military operation he was injured and lost a leg.  “I was amputated … then I stayed in the hospital for eight months, was discharged and … went home.” He remained there, after the war ended and decolonisation began, for some 45 years. However, he was unable to receive the welfare benefits to which Portuguese disabled veterans were entitled: his only compensation from the Portuguese state was a ‘provisory pension’ for the loss of his leg. Despite his difficult situation, Isaías married and was able to start a family. When I asked him if his life had been somewhat normal, he stated the obvious: “My life was not a normal life; even now it is not normal, because I am disabled…”

Like many other African veterans who fought for the Portuguese, Isaías had no means to come to Portugal. In fact, it was his son who paid for his airplane ticket, 45 years after the war’s end, so that he could finally claim his welfare rights as a Portuguese disabled war veteran. Since 2019 he has been living in a military care home, where, in his own words, he is “well fed” and well treated. He has been waiting for the conclusion of the bureaucratic process that will grant him the status of Armed Forces Disabled, which entails a considerable package of welfare benefits and rights.

This status was created after the Carnation Revolution, in 1976, thanks to a forceful campaign by the Disabled War Veterans’ Association. However, the law restricted the benefits to Portuguese citizens, and with decolonisation many of the African disabled war veterans lost their Portuguese nationality. Only in 2001 did Portugal’s Constitutional Court amend this, declaring the nationality requirement unconstitutional.

This did not necessarily improve the situation of African disabled war veterans. Unlike Isaías, many simply could not afford the trip to Portugal. “The problem is that not all of us have the possibility to come here to get the status.” What is more, when they are able to come, they have to leave their families behind and spend years in Portugal waiting for the end of the process that grants them the status. Some wait as many as 10 years. They are provided with food and housing but, as Isaías attests, not much more. They wait for years in a country for which they have fought, but which in the end remains foreign to them.

My interview with Isaías touched upon many things: racism, colonialism and the experience of war; decolonisation and what it meant to be a Portuguese veteran in a newly independent Mozambique; and also his time in Portugal. During our conversation, he conveyed a gentleness difficult to believe in someone who had gone through such hardship. Interestingly, and in contrast with similar publicised cases and with some of my own interviewees, he had no complaints about Portugal and expressed gratitude for the support he was receiving, despite the two years already spent in waiting. Nonetheless, on his decision to come to the former colonial power to claim benefits, he had telling words:

…I always counted on coming here because my problems could only be ended here.… Here they will provide for me, and what they provide me with is my path to survival. It is not about me, but my family. That is it.

I hope that Portugal can indeed provide for Isaías, one man of many who were caught between the end of empire and the birth of a nation. That these men’s welfare has not been properly addressed is proof that Portugal has yet to deal with its colonial past. As the fiftieth anniversary of the Carnation Revolution approaches, colonial war and colonialism remain unfinished business in the Portuguese democracy.

Carlos Martins is a PhD researcher in the Department of History and Civilisation. His thesis analyses changes in welfare provision between the Estado Novo regime and the Portuguese democracy; he has been focusing on Colonial War veterans as a case study.