In September 2021, I was lucky enough to embark on my first trip to visit archives in Zambia. My search for primary sources for my PhD project on the ‘Cape to Cairo Railway’ led me to the National Archives in Zambia´s capital Lusaka. Tired from days of skimming through files of the colonial administration, and hoping to find some railway-related reporting, I decided to order the oldest issues available of the local newspaper Mutende. This newspaper had sparked my interest as it was published in five languages (English, Bemba, Lozi, Nyanja and Tonga) and was aimed at a Black audience – an unusual publication in a racialised colony.

Flipping through the pages of the volume for 1938, trying to identify railway stories, I was struck by the front page of issue No. 33, November 1938, with the headline: “Mr. Chamberlain Brings Peace to Europe”. The opening paragraph, alongside a photo of Neville Chamberlain and Adolf Hitler, read:

There seems to be little doubt that the British Prime Minister, Mr. Neville Chamberlain, has saved the world from another large-scale war, by his patient and determined efforts at negotiation, which at the last minute, when war seemed almost inevitable, brought us peace.

If only they knew how wrong they are, I thought sadly, with the privilege of hindsight. Still reflecting on how interesting it was to see the war in Europe unfold through a publication in far-away Africa, I came across another story, in issue No. 62, May 1940, that caught my attention: “The Mad Bull. Another story to help you to understand the happenings in Europe.” The article used the analogy of a fierce bull ravaging villages to describe Nazi Germany´s aggression in Europe. The bull, so the article continued, was confronted by two strong villagers, Jim (Britain) and Tom (France), who instead of attacking the bull fenced him in, so as to tire the bull out before killing it. (For the full excerpt, see Facsimile 1 below). 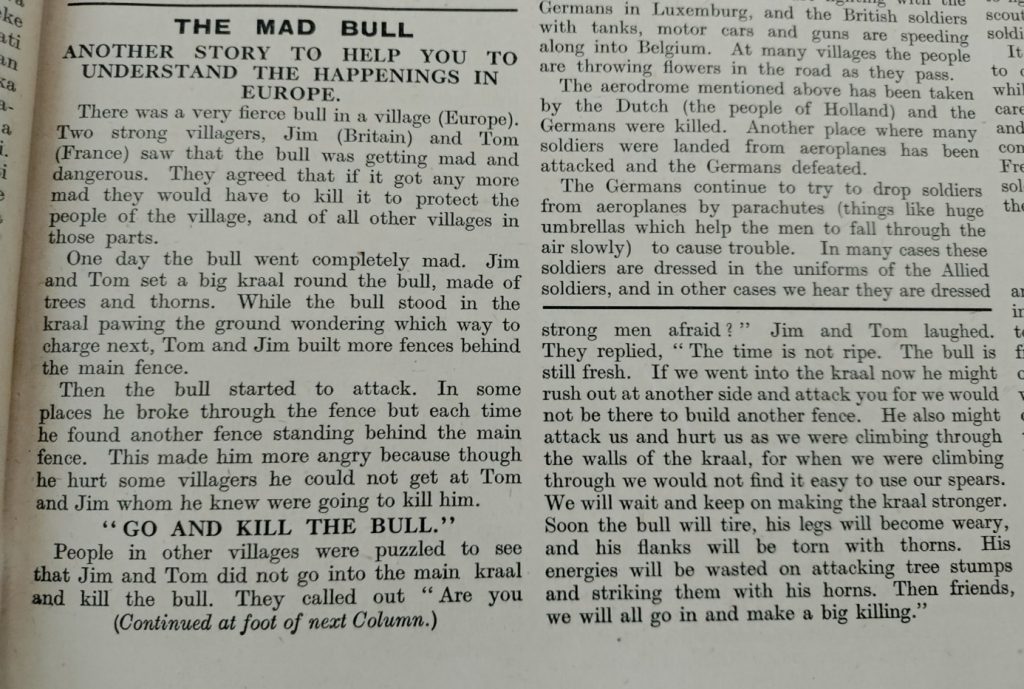 I found another story of this kind in issue No. 52, January 1940, probably referring to the scuttling of the German war ship Admiral Graf Spee in December 1939. It translated the German ship into a lion that was chased away by three dogs (small British fighting ships) and, after having been expelled from the cave in which it sought shelter (Montevideo), drowned itself in the nearest river. (For the story, see Facsimile 2 below). This story, which purported to explain what happened “in a way all can understand”, was published not only in English, but in at least one of the indigenous languages used in Mutende.

After my initial amusement had passed, I wondered what this was all about. Did African readers really need animal analogies to understand war? What kind of newspaper was Mutende and what does this tell us about the reporting on the Second World War to colonial subjects in the British Empire?

British propaganda in the colonies

Mutende was established in 1936 by the British colonial administration in Northern Rhodesia (today’s Zambia) as a medium to reach a Black audience and was the first of its kind in the colony. The founding of the multilingual newspaper followed the recommendations of a commission of enquiry after the largest strike by African mineworkers in 1935. The strike in the so-called Copperbelt of Northern Rhodesia is regarded as the first concerted action against colonial rule after the colonisation of the area, and it deeply worried the British administration. The commission was convinced that the miners had partly been radicalised by reading the Watchtower, a religious magazine published by Jehovah’s Witnesses and the only publication available to them. This perceived negative influence was to be countered by more government-friendly reading material. To ensure the pro-government agenda of the newspaper, its first editors, Charles Stevens and S.R. Denny, were both White and held positions in the colonial administration. Two Black clerks translated the articles into the four other languages of the publication.

During the Second World War, Mutende became part of British propaganda efforts; the administration even distributed free copies to local Chiefs to ensure a wide circulation. As Bizeck Jube Phiri put it in a recent article, the British colonial administration in Northern Rhodesia used Mutende and other media to disseminate anti-Germany propaganda across the territory and to promote support for the British imperial war efforts. “The aim was to communicate facts about the War among Africans across the territory and help to reshape battle tales into rational narratives.” (pp. 54-55). When Britain was accused of deploying a too passive strategy against Nazi Germany in 1940, propaganda efforts were increased. The mad bull story has to be understood in this context.

If translating the war stories into animal fables was a naive attempt to help African readers understand the war better, or if it was rather the brainchild of a colonial administrator’s racist fantasies, is impossible to assess. Perhaps it was both. Unfortunately, a lack of sources leaves us guessing how the animal stories were perceived by the newspaper’s readers.

The politics of multilingual news reporting

Historians and other scholars have long acknowledged that translating is not a neutral process. What was the role the two clerks played as they translated (and possibly adapted) the stories into Bemba, Lozi, Nyanja and Tonga? This merits further investigation – especially as one of them, Edwin Mlongoti, later became a pioneer of multilingual broadcasting in Zambia.

In any case, it can be assumed that the publication in indigenous languages did have a profound effect on readers: in the years to follow, the number of publications in multiple languages, and the number edited by Black journalists, rose steadily. Multilingual newspapers became a powerful instrument in the struggle for Zambia´s independence, although these vanished after independence was achieved (Mutende was discontinued already in 1952). The question of multilingual newspapers in Zambia however remained pertinent, and became highly politicised again in 2018, when the state-owned Times of Zambia received ministerial permission to publish articles in Mandarin for the large Chinese minority in the country. –This, although no such service exists today for the speakers of indigenous languages such as Nyanja, Lozi, Bemba, or Tonga.

Friedrich N. Ammermann is a researcher in the Department of History and Civilisation. He has published on power imbalances and lack of inclusivity in global history. His PhD thesis explores the legacy of the Cape to Cairo Railway in colonial Zambia and Zimbabwe.