On the commemoration in Germany of Anton Wilhelm Amo

Decolonising the German mind, street names, and society has been a long and challenging process. In a country that has long failed to deal with its colonial past, Afro-German activists have been struggling to make their voices heard. The ensuing debates on decolonising have taken on many forms in Germany: one is the continuing argument over the renaming of streets in so-called African quarters – conglomerations of street names of former colonies, African countries, and the surnames of German colonialists found in German cities and towns.

Walking through Berlin, one could easily get the idea that with the final renaming of a street, we have achieved a successful memory history that simultaneously corrects the error of naming a street after a Nazi, anti-Semite or colonial criminal and honours the work and life of someone worthy of recognition. In 2010, the renaming of a street in Berlin-Kreuzberg – previously named after a man who during the seventeenth century erected a slave castle in West Africa into May-Ayim-Ufer, was such a success. Similarly, the renaming of Berlin’s Mohrenstraße (“Moor Street”) into Anton-Wilhelm-Amo-Straße is meant to follow suit.

But who was Anton Wilhelm Amo, and why is his memory important today?

Here, I analyse some aspects of memory in public space. In the case of Amo, I reflect on the question whether the confrontation with Amo in public spheres is an adequate invitation to appreciate, analyse and critique his academic work beyond what his biography represents today.

Amo at the universities of Halle, Wittenberg and Jena

There is a plaque on the university campus in the Halle (Saale), easily accessible for university members and everyone else in the city, commemorating the philosopher and legal scholar Amo. Since 2019, the University of Halle-Wittenberg has its own working group for the memory of Anton Wilhelm Amo. The task of constructing a suitable public memorial has not been easy, due to how the German Democratic Republic (GDR, the former East Germany) expressed its solidarity with the socialist sister state Ghana. The statue of an unnamed sub-Saharan African man and woman is near a plaque in Amo’s memory, leading to the confusion that the statue shows Amo and his wife. Whereas the plaque is in Amo’s memory, the sculpture celebrated the independence and socialist revolution Ghana.

This confusion is problematic for public historical memory, as it takes away from Amo’s work and exoticises his person. The statue of a stereotypically stylised African couple has little to do with the actual life and thought of Anton Wilhelm Amo.

While the university’s working group tries very hard to correct this falsehood through Amo lectures and seminars for its students, these efforts remain mostly within the university. Those who have no interest for further engagement and are merely passing through campus on their way to the inner city might easily get the impression that the statue shows Amo and his wife. 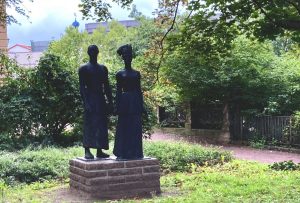 The life of Anton Wilhelm Amo

The biography of Anton Wilhelm Amo is rather striking; hence his service as a beacon for decolonising German society is not surprising. Most sources claim that in the early eighteenth century, the Dutch trafficked him to Europe as a slave, when he was a very young child. He was gifted to Brunswick nobility, as a servant and a living museal piece of some sort. Then, however, his life took a surprising turn. The rich Duke of Brunswick funded his education, and Amo ended up studying law and philosophy at the University of Halle. He spoke six languages and completed two PhDs, in philosophy and law. He lectured in a wide variety of disciplines, from law and metaphysics to political philosophy and even anatomy and astronomy. In short, Amo became a typical intellectual of his time, with expertise across a broad spectrum.

After the death of his main benefactor – the head of the Brunswick family – and amid growing conservatism, Amo’s life in Germany became progressively intolerable. Targeted by colleagues, mocked and bullied, he decided to return to Ghana on a ship of the Dutch West India Company in 1747. What we know about his life after this is only rumours.

Commemorating Amo in Germany is an integral part of the ongoing struggle of decolonisation of public space. Moving the GDR-era statue on the Halle university campus to create more distance between it and the plaque in his memory, and renaming a street in his honour, are important steps.

These initiatives, like the remembrance of May Ayim, Audre Lorde and others, signal important progress in taking the necessary steps to deal with racism in German society today. The presentation of black history in a public space through the figure of Anton Wilhelm Amo, directly targets persisting racist stereotypes and promotes the idea of African diasporic achievement.

The work of Anton Wilhelm Amo

The many positive aspects of discovering Anton Wilhelm Amo as a symbol also, unfortunately, risk putting his biography before his achievements. Particularly, as some aspects of the narrative about his life are contested, the written work that exists must be placed in the forefront of remembering Amo.

In 1734, Amo finished his philosophy dissertation in Wittenberg on what constituted the human spirit, and the disconnection of body and soul. He drew on, developed and contested some of Descartes’ work on the dualism of mind and spirit. His law dissertation, which was submitted before that in philosophy, is assumed to be lost. We know it was a defense of the legal rights and equality of black people in Europe because in 1729 a newspaper in Halle published a favourable article summarising Amo’s position.

To date, the two most extensive examinations of his work have been from the first independent leader of Ghana, Kwame Nkrumah, and the GDR scholar Burchard Brentjes. Neither completely refrained from using Amo’s legacy for his own political purposes. Since the overthrow of Nkrumah in 1966, other – also Ghanaian – scholars have written about Amo.

Contextualising how Amo’s thought developed from his West African beginnings and moved away from Akan philosophy and metaphysics could be important points of departure for researching him as an African philosopher in Europe. In contrast, Ghanaian philosopher Kwame Gyekye has argued that Amo was never an African scholar, as his education and teaching happened in a space otherwise completely devoid of African thought.

Decolonising the ivory tower and the public square

If Germany wants to move beyond a celebration of the improbability of his biography, we need to engage with Anton Wilhelm Amo as a philosopher and legal scholar, and the professional context in which he worked. Inaugurating an Anton-Wilhelm-Amo-Straße without proper contextualisation can lead to a diminution of the man’s achievements. The commendable efforts of the Halle-Wittenberg University to revive his written work and scholarly seminars for philosophers and legal scholars cannot suffice. Other German and international historians, philosophers and scholars of many other disciplines are called upon to analyse Amo’s work – and yes, to critique it wherever it does not measure up to comparable research by his contemporaries. After all, the dualism of body and mind remains a contested idea – for the philosophically trained and amateur practitioners of ‘kitchen philosophy’ alike.

No process of decolonising a society can occur in a lopsided fashion. The ivory towers decolonising by themselves would contribute little to these processes within German society at large. Likewise, if attempts to decolonise the public space of street names are undertaken without the necessary contextualisation from academics for their colleagues and the public alike, we have conceded that Anton Wilhelm Amo might become a symbol and a symbol alone.

Anna Orinsky is a PhD researcher in the Department of History and Civilisation. Her thesis investigates reproductive choice and policy Germany’s colonies of German-East Africa and Kaiser-Wilhelmsland (in the South Pacific).