At the 2021 Eurovision Song Contest, Romance languages seemed to win big. The Italian winner and the two runners up (France and Switzerland) gave the night a polyglot flavour. “Eurovision shines a light on languages“, wrote the BBC, praising the inclusion by the Netherlands of a 20-second segment in Sranantongo, an English-based creole from Suriname. But the rest of the Dutch song was less newsworthy – the artists sang in English, as did 18 of the 26 finalists. Even though the United Kingdom went home with nul points, English dominated the contest.

A language without competitors

Global English today is hegemonic in entertainment, commerce, governance and science. In higher education, English is a basic requirement. Anglophone ranking systems routinely award themselves top marks: of the 20 top universities in the 2022 THE rankings, 17 are in the UK or the USA. In the ‘internationalisation’ of higher education, English as a medium of instruction (EMI) is the only policy taken seriously in Asia, Africa, or Europe. In the Netherlands, EMI is standard, with most universities offering more Masters programmes in English than in Dutch. Some major languages, such as German, are protected by policy. But such initiatives rarely promote languages outside their established spheres of use. Globally, English has no serious competitor.

This asymmetry would be fine if language were just a code for expressing thoughts that we already have anyway. But it is not. The science is clear: Language impacts how we think, and even affects our values. EMI imposes a language-learning requirement: speakers of other languages must navigate the gatekeeping process of proficiency certification, which privileges standard English and favours candidates with social and financial capital.

A new language, the saying goes, gives us a new soul. But must we surrender our existing soul in return? Students taking degrees through English will never know what it would have been like to experience the same intellectual growth through another language. Language learning should be about expanding horizons. But if transcultural exchange is replaced by mimicry, if personal growth is replaced by an implied deficiency-based understanding of one’s own way of thinking and communicating, then narrower horizons, and domain loss, will result.

Multilingualism in education requires targeted policy. To understand how difficult this is, we need to grasp the full extent to which English dominates. In George Weber’s survey, as in Kai Chan’s Power Language Index and the Ethnologue’s EGIDS scale, English overshadows all other comers. Chan’s index gives it a higher score than Mandarin and French combined. David Graddol (1997) calls it one of only two truly global languages. Abram de Swaan calls English the hypercentral language that holds the entire world language system together. But no quantitative measure captures how English penetrates higher education, where students and policymakers tacitly consent to strip national tongues of their institutional functions. With domain loss threatening established languages, how can policy be used to bring about a more equitable linguistic environment?

The devil you know?

One solution is to decolonise English. This involves rejecting the ‘core vs. periphery’ understanding of the Anglosphere identified by Kachru. Kachru’s model describes an ugly truth: ‘inner circle” users inhabit the UK and white settler nations, while people in former colonies are relegated to the ”outer circle’. 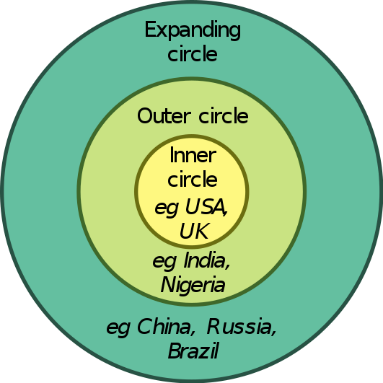 John O’Regan critiques the dominance of Standard English as intimately bound up with colonialism and capitalism. However, attitudes to English in ‘outer circle’ countries are changing, and populations growing. There are over 180 million English speakers in Nigeria, and hundreds of millions in South Asia. In Singapore, English is becoming the language most frequently spoken at home. Inclusiveness of many varieties, the rejection of accentism and the promotion of communication skills over rigid prescriptivism are positive steps. Cooperation in higher education must follow.

Even a linguistically decolonised Anglosphere still excludes speakers of other languages, especially those in diglossic systems without English. In Senegal, Ivory Coast, Paraguay, Uzbekistan or Angola, regional and local languages coexist with international languages imposed by colonisers. For students there, learning English means adding a third language – a treat for enthusiastic polyglots, but tedious if you just want to study law or engineering.

Promoting other languages in higher education is democratic, equitable and empowering. Democratic because it opens doors to millions of people. Equitable because the learning requirement is more symmetrical. Empowering because the norms of one dominant language are no longer the only option.

Will multilingualism in  higher education ever happen? Speakers of Portuguese have proposed it as a language of education in the Global South, beyond the Lusosphere. Could multilingualism work in Europe? Unlikely – any talk of English declining after Brexit has come to nothing; it will continue to dominate. Dutch, Italian, Russian, Portuguese and Spanish are functionally versatile transnational languages, used in established higher education systems. German has 100 million speakers in six European countries (seven counting Liechtenstein), and German-speaking countries host some of Europe’s top universities. But none of these languages can realistically compete with English; the global province of the Anglosphere is too powerful.

French is an exception. It is used by 312 million speakers on five continents, including 2.7 million in overseas France. Africa is home to 44 percent of the world’s Francophones. Most of these speakers are diglossic, a common situation in post-colonial linguistic systems. French is the official language of 29 countries, spoken at the UN, the EU and NATO, used in universities in Algeria, Belgium, Canada France, Morocco Senegal and Switzerland, and is the second-most studied language in the EU.

A global, decolonised French could meet English on equal terms. In this pluricentric higher education system, language learning would once more be a meeting of cultures, Anglophones would have good reasons to expand their linguistic repertoire, and hundreds of millions of diglossic French speakers in Europe, Africa, Canada, the Caribbean and Polynesia would have access to global higher education without needing to switch to English. Those who speak neither language could choose between the two. To achieve this, the decline of foreign language programmes in English-speaking countries must be reversed, international exchanges with French-speaking universities must be supported and incentives must be offered to students learning French.

It might seem strange to critique the world’s most powerful language and then advocate for the second most powerful. But realistically, the way to counter the provincialism of academic monoglossia is to challenge English with a real competitor. French is suitable not only because of its many speakers (Mandarin, Spanish and Hindi have more), but also because of their geographical dispersion and cultural diversity. As with English, it is a coloniser language which has been appropriated, changed and used by hundreds of millions of people in countries with growing education systems.

In parallel, further languages must be supported through policy and funding. International educational institutions have a special duty to make this happen. If domain loss is slowed, if linguistic diversity in higher education becomes the norm in Europe and worldwide, then we can finally declare: multilinguisme – douze points.

Fergal Treanor is an applied linguist. He teaches communications and English for academic purposes at the EUI Language Centre.

The author would like to thank the EUIdeas blog editor and Prof. John O’Regan for their substantial editorial contributions.