Climate change: We need to talk about methane

At the COP26 climate conference in Glasgow, there will be much talk of methane. To reach the ambitions of the Paris Agreement, we need action on all greenhouse gases – not just carbon dioxide. The Global Methane Pledge signed last month by the EU and US, with commitments from more than 30 other countries, sets a target of 30% emission reductions by 2030, and will be a significant part of the discussions at Glasgow.

The recent IPCC (International Panel on Climate Change) report on the science of climate change highlights rapid increases in methane emissions over the last decade or so, and what this means for at least short-term global warming. Methane is produced in large quantities by livestock farming; it is also emitted from rotting waste, oil and gas drilling processes and fracking.

A key question for policy makers is how to prioritise emission reductions across different types of greenhouse gas, and in relation to different sources of emissions.

Much media commentary, however, lumps all these emissions together. This is a mistake, as different gases have different impacts and reducing different emission sources will have different consequences. There is no simple ‘quick fix’ focused on methane.

Media headlines often focus on livestock farming, typically depicted with a handy picture of belching cows. But a more sophisticated debate is required, given the urgency of climate action. This is what the PASTRES project, together with 13 other organisations, argue in a new report.

What needs to happen? First, we need to differentiate among greenhouse gases.

Methane is, in the technical language of the IPCC, a ‘short-lived climate forcer’. It has a major impact on warming, but disappears relatively quickly – in the case of methane, after nine to 12 years. Carbon dioxide is very different, with less immediate effect, but persisting essentially forever. If you do not reduce CO2, you cannot deal with climate change in the long term. Reducing methane may have a big impact faster. The choices all depend on time frames, sequencing and the effects of different gases.

The standard way to assess global warming impacts is using CO2-equivalent measures. Conversion factors are then chosen to create a single metric taking account of different gases’ so-called global warming potential (GWP) or combined global temperature change potential (CGTP). However, as the new IPCC report acknowledges, this is easier said than done. There are different ways of making the calculations, with very different results and implications. As the IPCC report notes, “estimates of future warming are potentially ambiguous where emissions are aggregated” and the choice of emission metric “affects the quantification of net zero GHG emissions and therefore the resulting temperature outcome after net zero emissions are achieved.”

For example, the GWP* measure, proposed by scientists from Oxford University, suggests that the impact of short-lifetime gases like methane is lower than other measures previously used by the IPCC and others. Instead, they argue that there is a need to focus primarily on CO2 and to reduce fossil fuel use in particular. Cars and cows are just not equivalent.

Even if we could decide on the appropriate emission factors, the need to reduce methane emissions still remains. So which emissions, where?

Reducing leakages from gas and oil drilling, as well as waste dumps, should be relatively straightforward through quite immediate regulatory requirements, incentivising investments in technologies and improved practices. Fracking and further shale gas exploration should simply be stopped.

Emissions from livestock systems are more complicated. Livestock-based emissions are hugely varied, depending on feed source, manure management and so on.

There is an argument that stall-fed, factory-farmed animals produce less methane per animal because they are fed improved, high-quality feed and because intensive livestock units can manage manure-related emissions more effectively. By contrast, it is argued that extensively reared animals make use of low-quality forage and produce more methane per animal. However, this position, heavily pushed by advocates of industrial livestock farming, is flawed for at least three reasons.

First, extensively grazed animals may improve their nutrition and so reduce methane emissions through selective feeding assisted by herding. In mobile pastoral systems, for example, indigenous breeds are adapted to eat highly nutritious forage combined with rough grass, often through intake of green bites in certain wetland areas or browse with high tannin contents. These feeding practices reduce methane production significantly compared to the low forage-quality feeding of ‘improved’ breeds used in experimental settings, which are often used to ‘prove’ the benefits of imported, supplementary feeding.

Second, supplying feed to industrially produced animals may have major climate impacts – for example, deforestation by soya grown in the Amazon, or international transport of feed to animals in feedlots. Or, think about the sunk carbon in the infrastructure of industrial livestock units or the transport of products and inputs.

Third, dispersed deposition of manure across landscapes by extensively managed livestock may result in incorporation into the soil and sequestration of both carbon and nitrogen rather than in emissions, if manure and urine do not collect near water sources (the result being methane production).

Studies by the International Livestock Research Institute in Kenya have shown that actually measured emissions from real animals grazing on real rangelands produce much less than assumed in standard models used in global assessments. The emission factors recommended by the IPCC in the past massively overestimate emissions from African animals grazing on natural rangelands.

As research in the Ferlo region of northern Senegal has shown, mobile pastoral systems can be in overall carbon balance under certain circumstances, even when consuming low-quality forage. We need a wider, systems approach to assessment, and further research on what diverse livestock systems means for emissions.

Figure 1. A simplified systems diagram of GHG emissions and carbon storage in a pastoral ecosystem in Senegal 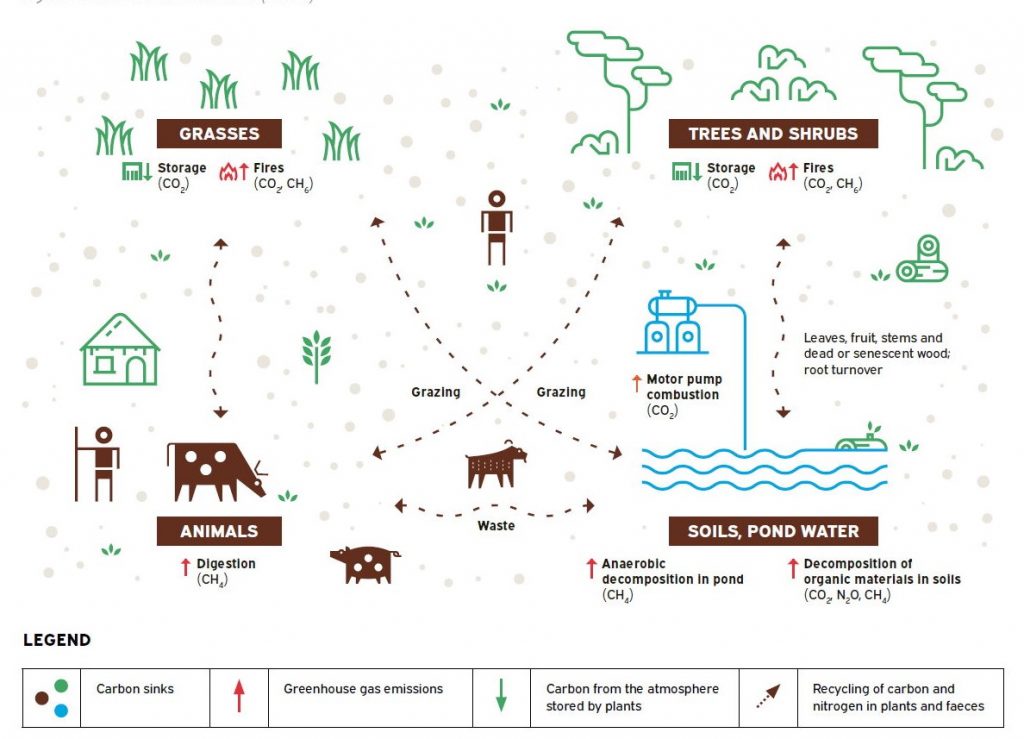 And, of course, not all methane emissions should be seen as additional; it depends on the baseline used. For industrial systems, the climate impacts are clearly additional – a new industrial unit creates emissions where none existed before. But this is different for extensive systems, especially pastoralism, which occupies rangelands covering half of the world’s land surface.

In these areas, whether the savannahs of East Africa, the steppes of Central Asia or the Arctic tundra, pastoralism replaces (or combines with) wildlife and other herbivores, including for example termites (which themselves produce surprisingly large amounts of methane). ‘Natural’ systems, which have existed for millennia with no observable impacts on the climate, produce methane, just as do pastoral systems, but they are broadly equivalent. 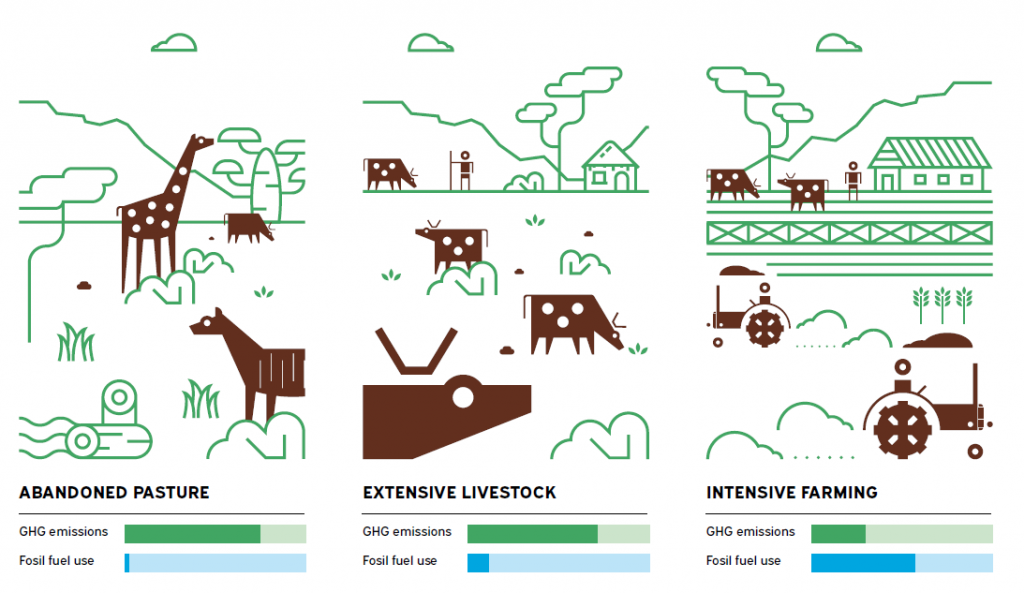 In the end, choices about emission mitigation priorities are about justice, as well as the science. So where should emission reductions be prioritised?

With methane rising up the agenda as a major ‘gas of concern’, then, focusing on quick wins through regulating (or banning) oil and gas exploration and fracking seems sensible. Within the agriculture sector, decisions are more complex. While not ignoring the possibilities for mitigation among extensive systems, the priority must be reducing emissions from industrial livestock production through feed supplementation and waste management for example.

Global commitments on methane should therefore focus on the big polluters. Lumping pastoralism and other extensive systems, where emissions are minimal and not additional, into new regulatory agreements for measurement, reporting and verification of methane emissions, would be a mistake.

Indeed, extensive systems – most notably mobile pastoralism – can offer a way forward for a climate-friendly alternative that offers many benefits for livelihoods, diets and the environment, often in poorer and marginalised communities. Given the right opportunities, pastoralists can be at the forefront of tackling climate change.

The PASTRES project’s full report can be accessed here.

Ian Scoones is a Professorial Fellow at the Institute of Development Studies at the University of Sussex and is co-director of the ESRC STEPS Centre. As Principal Investigator of the ERC project PASTRES, he is affiliated with the Schuman Centre (the other PASTRES Core Researcher is the EUI’s Michele Nori).