The multiple facets of the COVID-19 crisis create a unique context for studying the countervailing dynamics of civic mobilisation and demobilisation. My colleagues Endre Borbáth, Sophia Hunger and Swen Hutter (at the Free University Berlin and the WZB Berlin Social Science Center) and I set out to map and explore these push and pull dynamics in Western Europe. For this purpose, we use survey data from seven countries (France, Germany, Italy, the Netherlands, Spain, Sweden and the UK), collected in the framework of the ERC Synergy Project SOLID. The questionnaire was administered following the first wave of COVID-19, between June 5 and June 22, 2020, with a total sample size of 7,579 respondents. Our detailed results were published in Swiss Political Science Review.

The survey data show us the various levels and forms of engagement during the early COVID-19 crisis. What is more, the data help us understand how perceived threats coming from the pandemic, but also ideological predispositions, have shaped Europeans’ engagement repertoire.

How did citizens get involved?

The COVID-19 pandemic brought, on the one hand, new measures restricting public gatherings, but on the other hand, a need for solidarity with and support for those at risk. Did people shift from political forms of engagement that became less feasible (such as street demonstrations or public gatherings) towards easier forms (primarily online) or perhaps other types of civic engagement, such as helping in the neighbourhood or donating money)? 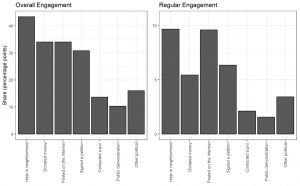 Figure 1 presents levels of engagement in a variety of forms. We separate overall engagement (participating in at least one action) from regular engagement (engaging in an action more than once). Forms of civic engagement indeed are more prevalent than forms of political engagement, although the COVID-19 pandemic did not at all bring about a halt to the latter.  Large shares of respondents indicated that they had helped in the neighbourhood (over 43 percent did so at least once, and 9.7 percent regularly) and donated money (34 percent at least once, and over 5 percent regularly). In addition, more than a third of the respondents report that they posted something related to politics on the internet having to do with the COVID-19 crisis, or that they signed a petition at least once.

Surprisingly, despite restrictions on public gatherings in the first wave of the pandemic, a non-trivial share of respondents also reported having attended public demonstrations. These results indicate participation levels similar to those found in the latest wave of the European Social Survey (2018), before the beginning of the pandemic (in 2018, about 9.8 percent of people demonstrated).

Our study also investigates the individual-level drivers of engagement. What makes the spread of COVID-19 a unique context for exploring these dynamics is not only the multifaceted threats it raises in different issue areas (health and economic), but also the different levels on which people identify threats: egotropic are the perceived threats to oneself, and sociotropic are those perceived to society at large.

Figure 2. Effect of threats and ideology on engagement 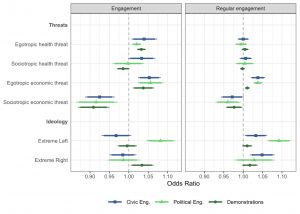 Figure 2 presents the effects of threats and of ideology on engagement. Again, overall engagement (participating at least once) is distinguished from regular engagement (participating more than once). Horizontal lines to the right of the vertical dotted line indicate positive effects on engagement, leading to increased participation, while lines to the left of the vertical dotted line indicate negative effects, leading to decreased participation.

Our results show that, despite a strong focus on public health issues in the first wave of the pandemic, economy-related threats have stronger effects. Further, egotropic threats are more influential than sociotropic ones for mobilising participation across all forms of action, especially when it comes to the economy. Fear for one’s personal finances leads to increased participation, whereas fear for the state of the economy more generally has a demobilising effect.

One possible explanation for these results is the timing of our survey. In June 2020 the impact on national economies was not yet clear, and one could hope that the measures introduced to protect public health would phase out relatively quickly. Beyond threats, participation also appears to differ across the ideological spectrum, especially with regard to regular engagement. In this case, longer-term predispositions that are captured by ideological left–right orientations seem to explain regular engagement better than short-term crisis-driven threat considerations.

All in all, our study reveals fairly high levels of civic and political engagement during the first phase of the COVID-19 crisis, with levels and forms that were prevalent across Western Europe before the start of the pandemic. The results underscore the importance of distinguishing not only between health and the economy as two spheres in which the COVID-19 crisis has created threats, but also between the individual and the societal dimensions of perceived threats, in motivating overall participation. Finally, the recent sense of crisis arising from the pandemic has not eclipsed longer-term predispositions to political action that are captured by the ideological left–right divide.

Ioana-Elena Oana is a Research Fellow at the EUI. Her work within the SOLID project focuses on collective mobilisation, public opinion and party competition in the multiple crises that have hit the EU since 2008. On a related topic to this post, read her article on COVID-19 threat perceptions in West European Politics.