A forest fire in California

A smoldering start to the decade

Australian bushfires ushered in 2020. It was an enormous natural disaster that killed dozens of people, destroyed thousands of homes, and burned 17 million hectares of land—an area larger than England or Ireland and nearly the size of Poland. Later, in the northern hemisphere’s summer, major wildfires hit California and are still burning there, and in other states.  In the last three years, California has been hit by the top 5 most massive wildfires in its history.

The forest fires have been a problem not only locally, where they destroy natural habitats, plants, animals, human life, and infrastructure, but also globally. They are terribly polluting, releasing clouds of pm10 spreading hundreds of miles away from the burning area. These pollutants have adverse consequences for health, especially the elderly and newborns.

In this short article, I will argue that wildfires are becoming a larger problem due to climate change and human misbehavior. Nevertheless, we are not doomed, as monitoring of fire danger and policies of fire suppression have  been shown to be, with some limitations, effective in Europe.

Climate change and global warming partly explain the events in Australia and California. The increase in average yearly temperatures and droughts intensify dry and hot summers, increasing the likelihood that wildfires will break out. Practitioners constructed the Fire Weather Index to estimate fire danger based on indicators such as fuel moisture, temperature and wind.  These conditions have affected areas that up to now have been safe.

For example, in 2018, northern parts of Europe such as Sweden suffered greatly from wildfires. Figure 1 demonstrates the area burnt by wildfires in thousands of hectares from 1995 to 2019 in Sweden. 2018 represented an extreme case. The severity of the event triggered Greta Thunberg’s protests in front of the Swedish parliament in August 2018 sparking the international movement to fight climate change.

However, 2020 did not provide any disturbing news on wildfires in the European context. Is Europe safe from wildfires?

Fire seasons are cyclic, and wildfires are part of a process of creation, destruction, and regeneration of a natural ecosystem. Therefore, not all wildfires should be deemed problematic from an environmental perspective. However, human intervention either aggravate or improve this delicate natural equilibrium.

Investigations show that 95% of wildfires in Europe and 85% in the U.S. are started, either accidentally or intentionally, by human beings. Similarly, the construction of housing and infrastructure in areas at risk partly explains the increase in fires in California. Moreover, the suppression of all wildfires is counterproductive, as they eliminate fuel that would otherwise build up and potentially contribute to more extreme conflagrations.

In Europe, the territory most vulnerable to wildfires is the Mediterranean area, with Spain, Portugal, Italy and Greece at highest risk. Here, the hot and dry summer season determines a perfect environment for wildfires to break out. However, researchers documented a reduction in the number of fires and hectares burnt in the last decade. In figure 2, I use data from the “European Fire Information System” from 1980 to 1999 and the “European Fire Database” from 2000 to 2019 to observe the thousands of hectares burnt per year in Spain, Portugal, Italy and Greece. Here, we can observe a steady decrease over time in all countries except Portugal. 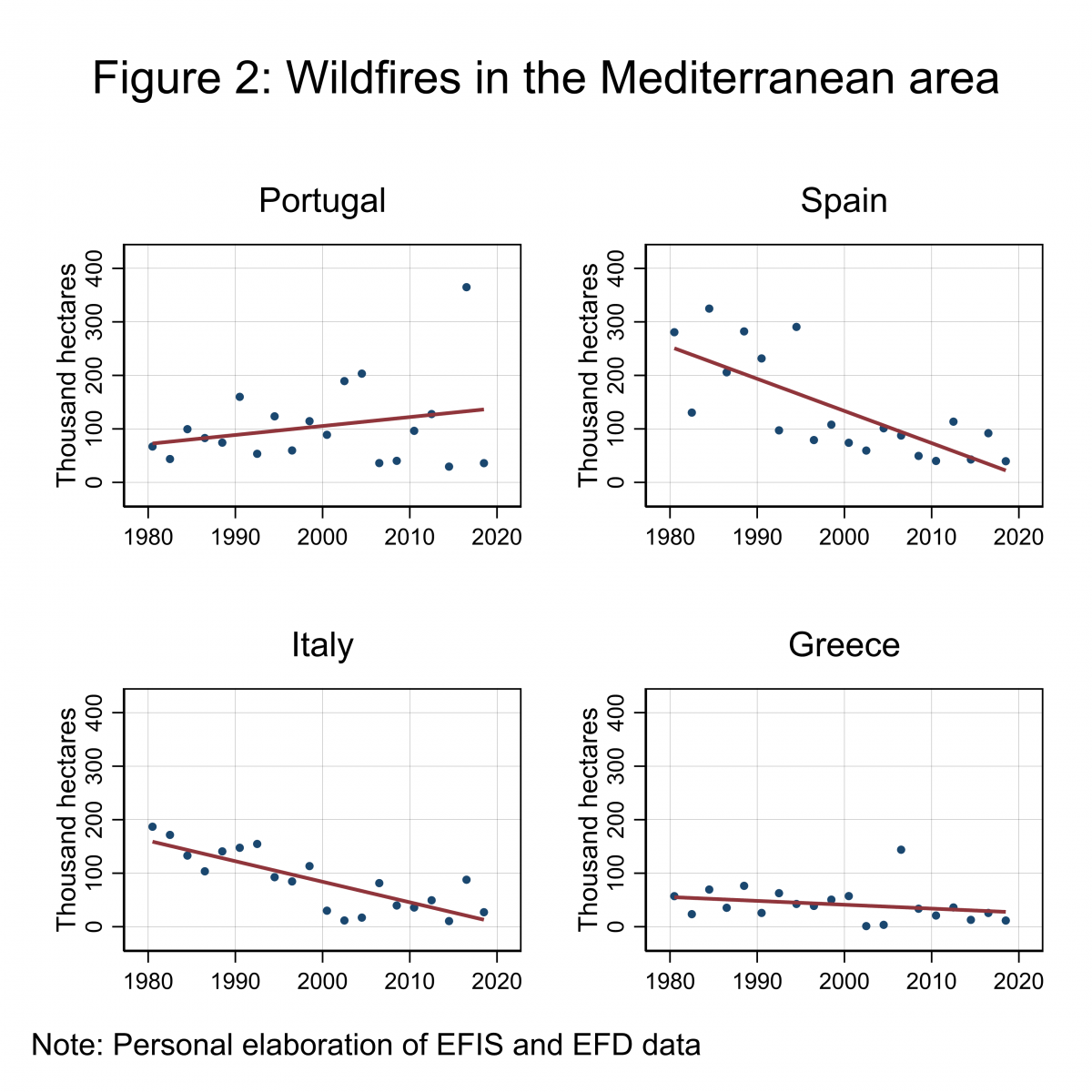 The trend for Portugal is mixed and is driven by an outlier year, 2017, in which the country experienced two massive wildfires. The June fire, known as Pedrógão Grande, was a national disaster and burnt approximately 4% of Portugal’s territory. A second large fire broke out in October.

The decrease in the intensity of wildfires in the other Southern European countries is surprising as climate change and the increase in temperatures would predict the opposite. Human intervention offers a reasonable explanation for this trend.

To limit wildfires, the actions that can be taken are three: fire suppression, fire prevention and the elimination of combustible material from areas at risk. The adoption of more effective fire-fighting policies seems to explain the reduction in land burnt in wildfires in Europe.

In the 1980s, the Mediterranean area  was badly hit by significant wildfires and policymakers responded with fire suppression policies to reduce similar events to happen. Fire suppression shows that human intervention can limit wildfires even when these might be expected based on risky meteorological conditions.

Unfortunately, achievements in wildfire management are often short-lived. Events such as the 2017 Pedrógão Grande fire could happen again, and it is difficult to predict how environmental conditions will be affected by climate change and global warming.

The future of wildfires in Europe

Wildfires are part of a complicated interaction between weather conditions, climate change and human intervention. For this reason, it is not easy to predict how the intensity of wildfires will evolve in the future in Europe. Monitoring weather conditions and long-term climatic trends are relevant to identify the new areas at risk. Similarly, fire suppression policies are critical and should be provided with more funding to fight and prevent the emergence of massive wildfires. The hope is that the technological progress in risk detection and the efforts made by the EU will be fast enough to prevent new calamities from happening and contain the dangers determined by climate change, ensuring a decreasing trend in extreme fires for the whole of Europe.

Risto Conte Keivabu is a PhD researcher at the EUI in the SPS department. His current research deals with the consequences of climate change on individual health and behaviour. More specifically, he is interested in the effects of stress caused by heat and pollution on individual outcomes and how sociodemographic characteristics moderate the impact.