How serious is the US notification to leave the Paris Climate Agreement?

The US withdraws from the Paris Agreement

On 4 November 2019 US President Donald Trump provided written notification confirming that country’s intention to withdraw from the Paris Climate Agreement, thereby setting in motion the one-year process leading to the country’s formal withdrawal in November 2020. Opting out of the Agreement was one of President Trump’s banner issues during his election campaign in 2016, and he took the decision to withdraw soon after his inauguration in 2017.

‘America first’, regardless of science and research

In his 2017 speech announcing the US withdrawal from the ‘non-binding Paris Climate Agreement’, President Trump cited his interest in protecting the ‘wellbeing of American citizens’. He argued that the Paris Agreement would unfairly disadvantage the US to the exclusive benefit of other countries, costing his country in terms of ‘lost jobs, lower wages, shuttered factories, and vastly diminished economic production’.

Trump also claimed that the Paris Climate Agreement would cost the US $3tn in lost economic output and 6.5 million jobs. His accounting, however, did not seem to include findings on the costs of climate change, such as those published in the US Government’s own 2017 Climate Science Special Report. That document, a stand-alone report to assess climate-related risks and inform policy-makers, estimated that the economic costs to the US of extreme events due to climate change since 1980 have exceeded $1.1 trillion, and projects that climate change would cost the US hundreds of billions of dollars.

The same report concluded that it is extremely likely that human activities, especially emissions of greenhouse gases, are the dominant cause of the observed warming since the mid-20th century, and predicted that cascading effects could severely impact human health, the environment, and economic growth.

Moreover, Trump also ignored the job-creating potential found in the development of the green energy sector. For example, the International Renewable Energy Agency (IRENA) reports that around 786,000 Americans work in the renewable energy industry.

The United States is the second-largest global emitter of greenhouses gases, releasing around 15% of the total global amount of carbon dioxide emissions. Out of the Paris Agreement, the US pledges no formal commitment to lower its emissions or work towards minimising global warming.

The US, as a developed country, was seen as a significant source of technology and finance to help developing countries transition to low carbon economies. Article 9 of the Paris Agreement calls for developed country Parties to provide financial resources to assist developing country Parties with respect to both mitigation and adaptation in continuation of their existing obligations under the United Nations Framework Convention on Climate Change (UNFCCC). The US withdrawal thus jeopardises the $100 billion a year set by the Agreement to flow from developed countries to developing countries (by 2020) to implement their Nationally Determined Contribution (NDC) commitments to emission reduction.

Not all Americans are staying quiet on climate issues

Compared to its delegations at previous Climate Conferences, the United States is expected to send only a small team of negotiators to the COP25 in Madrid this December.

Notwithstanding the position of the United States government, however, it would be wrong to say the nation as a whole has abandoned its commitment to targets or has nothing to say about climate change. In fact, the public will be well represented in Madrid by US subnational and non-state actors who will show their efforts to implement US climate targets under the Paris Agreement (carbon emissions reduction of 26 to 28 percent from 2005 levels by 2025) and strengthen international partnerships to tackle the climate change challenge.

‘We Are Still In’ is one example of a coalition of US cities, states, tribes, businesses, universities, healthcare organizations, and faith groups who will actively take part in the next COP25. They will be joined by civil society and frontline activists from the United States to advocate for increased climate ambition. 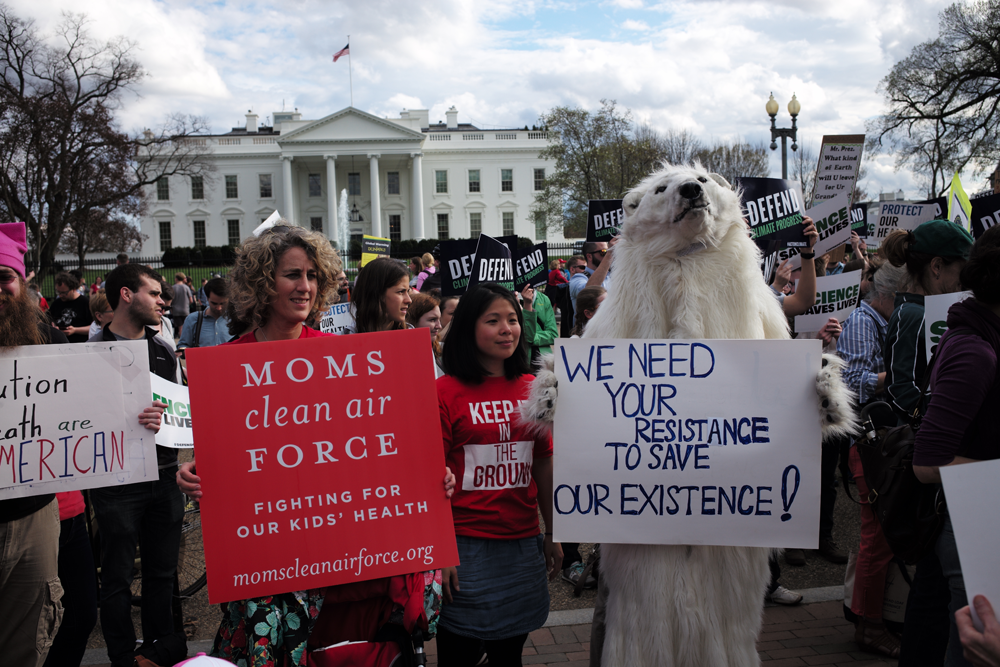 A climate protest in front of the White House. Credit: Phil Pasquini, Shutterstock

In addition, 2019 also saw the introduction of the Green New Deal, a non-binding congressional resolution aimed at tackling climate change. The proposal calls on the US federal government to launch a 10-year mobilisation to, among other things, achieve net-zero greenhouse gas emissions, invest in sustainable infrastructure as well as research and development of clean and renewable energy technologies and industries, and guarantee the creation of high-quality jobs in clean energy industries. The resolution is a clear demonstration of opposition to the Trump administration’s short-sighted vision on climate change and its devastating consequences.

There’s no saying the US won’t opt back in

The Paris Agreement is open and flexible, and the United States could well become a member again in the future. If President Trump loses the 2020 election, the winner could change course and lead the country to rejoin the Paris Climate Agreement within 30 days of his or her election.

From the Democratic side, it is conceivable to believe that the US will rejoin. For example, Democratic presidential contender (and former Republican) Michael Bloomberg,  who is also the UN Secretary-General’s Special Envoy for Climate Action, recently issued a statement in which he declared ‘looking ahead to 2020, the American people must elect leaders who will confront climate change and put the public’s health and safety first. Until then, we will continue to fight the climate crisis with the urgency required, city by city and state by state. We can’t afford to wait.’

Isabella Alloisio is a Research Associate at the Florence School of Regulation Climate of the European University Institute and Director of the online course on Climate Governance in collaboration with the School of Transnational Governance. She holds a MPhil in International Relations from the Geneva Graduate Institute and a PhD in International Law and Economics from Bocconi University Milan. She has been visiting scholar at University of California at Berkeley.