The imminent risk of nuclear proliferation in the Middle East

‘Some countries have missiles with nuclear warheads, not one or two. But (they tell us) we can’t have them. This, I cannot accept’, said Turkey’s president, Recep Tayyip Erdogan, in a meeting of his governing party this September. It is not the first time that Turkey pursues the bomb. But this declaration comes while Ankara is invading north-eastern Syria, leaving its allies and adversaries in a state of uncertainty.

The international community should not underestimate Turkey’s plans to acquire nuclear weapons and opt out of the 1968 Treaty on the Non-Proliferation of Nuclear Weapons (NPT). It could bring disastrous consequences to a very unstable Middle East region, not to mention to the NPT regime itself.

Conditions for a nuclear-free Middle East are worsening

First, thanks largely to the withdrawal of the US from the UN’s Joint Comprehensive Plan of Action (JCPOA) and the effects of its secondary sanctions, the continuing confrontation over Iran’s nuclear programme has provoked several strategic uncertainties in the region.

Second, the enduring conflict in Syria presents major security concerns about stability for the whole region.

Finally, due to a series of disputes in the context of the NPT regime, which includes the abandonment of the INF Treaty and the long-term modernisation of Russian and American nuclear arsenals, the deteriorating relationship between the US and Russia has led to progressive erosion of nuclear arms control and non-proliferation norms.

The entire situation could irreversibly devastate all hopes of creating a WMD-free zone (WMDFZ) in the Middle East.

Although nuclear weapons have never been used in the Middle East, some like Tytti Erästö, Senior Researcher in the SIPRI, have pointed to the risks of an ‘asymmetric nuclear order in the Middle East’. Some states in the region have acceded to international conventions, while Israel has not. Some countries, such as Syria and Iraq, have even (unsuccessfully) sought to develop nuclear weapon programmes of their own. 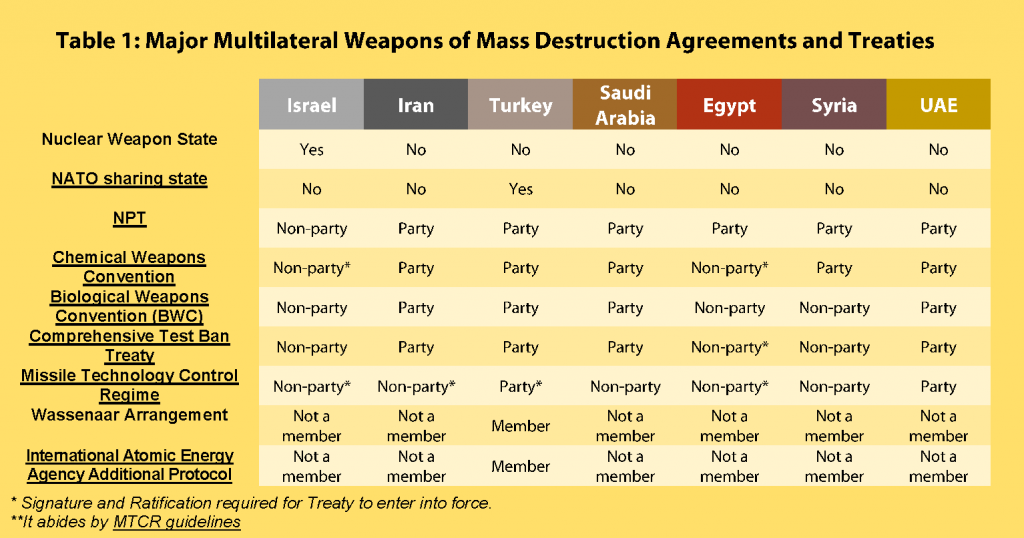 Thus, the risk of nuclear proliferation in the Middle East remains a global security problem. I would argue that to avoid this threat, states must tackle the following outstanding issues:

Concrete steps to make the Middle East a WMDFZ

Although NPT States Parties adopted a resolution in 1995, co-sponsored by Russia, the UK and the US, calling for the establishment of a WMDFZ, not much progress has been made since then.

The 2010 NPT Review Conference Action Plan called for a regional conference in 2012, but that was postponed indefinitely. In November 2018 the First Committee adopted a draft resolution, submitted by the Arab States, requesting the UN Secretary-General to convene a conference on the establishment of a WMDFZ, taking the 1995 resolution as its terms of reference. The conference is currently scheduled to take place in New York in 18 – 22 November 2019, notwithstanding US and Israeli opposition. The inability to get all Middle Eastern states including Israel to agree on a plan established ‘on the basis of arrangements freely arrived at among the States’ has left the region in a ‘nuclear limbo’.

Israel has long maintained a policy of ambiguity or opacity (amimut) about its nuclear arsenal. While the state neither acknowledges nor denies its nuclear weapons capability, declassified documents indicate that Jerusalem assembled its first nuclear device between 1966 and 1967. It is estimated that Israel may have 80-90 nuclear warheads.

In addition to being the sole nuclear weapon state in the Middle East, Israel is also the only country that has not acceded to the NPT Treaty or signed a comprehensive safeguards agreement with the IAEA.

Arab states and Iran have long shared the view that Israel’s nuclear weapons are an existential threat to regional security. Thus, convincing Jerusalem to participate in the conference on WMDFZ would be a major step towards disarmament in the region.

Iran’s fearsome regime: with or without the bomb

Iran does not possess nuclear weapons, but it has conducted activities conducive to developing a nuclear warhead. At the same time, Iran’s active ballistic missile program is one of the largest deployed missile forces in the Middle East, with over 1,000 short and intermediate-range ballistic missiles.

Under the JCPOA, Teheran restricted its nuclear programme and established monitoring and verification measures. Even so, the US, under the Trump administration, reinstated sanctions, citing Iran’s support for Shia islamist groups as a regional threat and Teheran’s continuing ballistic missile development as a global threat. On 8 May 2018, the US withdrew from the JCPOA.

Retaliating against US sanctions, Tehran declared it will scale down its commitments under the JCPOA, which leaves its future in doubt. For regional neighbours (namely Israel and Saudi Arabia) that see Iran as a threat, the JCPOA is almost as dangerous for them as a nuclear Iran.

On 9 October 2019, Turkey invaded Syria to create a 30 km-deep ‘safe zone’ in the north. Despite ceasefire agreements with the US and Russia, Turkish and Syrian remain belligerents.

Syria itself poses a nuclear proliferation risk. Its nuclear programme has been under significant international scrutiny since Israel’s September 2007 airstrike on Al-Kibar. IAEA attempts to investigate the country’s nuclear programme have been hindered by limited Syrian cooperation and the ongoing civil war.

At the same time, while Turkey is not known to possess nuclear, chemical, or biological weapons, Mr. Erdogan has designed a programme even more advanced than that of Saudi Arabia. Turkey as an independent nuclear weapon state poses risks both for the Middle East and for the Euro-Atlantic region. Turkey would be the first NATO member to break out of the NPT treaty.

If the JCPOA falls apart and is not replaced with a new agreement, Iran might move to acquire nuclear weapons. That would encourage Israel to abandon its amimut policy and declare itself a nuclear weapon state, thereby pushing other regional rivals like Saudi Arabia and UAE to acquire their own nuclear weapons. Other Middle Eastern countries would likely follow suit.

The same result is likely if Turkey acquires nuclear weapons. Furthermore, a continued Turkish invasion might incite Syria to reactivate its primitive nuclear weapons programme, perhaps with the help of its ally Russia, to deter Ankara from taking more Syrian territory. An additional worry is that terrorists operating in Syria could obtain these nuclear materials to create a dirty bomb or an improvised nuclear device, as they did with chemical weapons.

Given the current security environment, it is very unlikely that the end goal of freeing the Middle East of all WMD and their delivery vehicles will be achieved.

The role of regional threat perceptions in both Israel’s nuclear weapon and Iran’s missile policies, as well as Turkey’s current appetite for nuclear weapons, demand that the disarmament and non-proliferation dialogue is followed by immediate, concrete actions to address the issues facing the region. Only then may we hope to avoid escalating nuclear armament in the Middle East.