Austria: The FPÖ’s Decline as the ‘Party of the Little Man’?

In her recent EUIdeas article entitled ‘Austria’s snap election: Is the Freedom Party (FPÖ) going to fade away?’, Lenka Dražanová suggests explaining the electoral collapse the far-right Freedom Party experienced in the recent parliamentary elections in Austria by focusing on the salience of the ‘immigration issue’. She argues that aside from the so-called ‘Ibiza-scandal’ and internal conflicts, ‘the diminishing salience of immigration is likely diluting support’ for the party.

While the article makes a number of important contributions to our understanding of how attitudes to immigration can shift contribute to success and failure of far-right parties, I argue here that conceptualizing the Freedom Party (and similar parties in Europe) effectively as single-issue anti-immigrant parties, and explaining its success and failures in this frame fails to properly explain both the social dynamics and the underlying factors of these developments and the role anti-immigrant positions play in the process.

Dr Dražanová’s first graph shows how Austrians attributed varying importance to numerous issues over the past 15 years. The article rightly states that ‘before 2015 few Austrians considered immigration to be a salient concern when compared to economic issues such as prices and unemployment’ and interprets the FPÖ’s electoral success, winning 25.95% of the vote in the parliamentary elections of 2017, as the result of the increased salience of immigration since 2015. As illustrated below in Graph 1, this fails to explain past electoral successes of the Austrian far right. The party gained 17.54% in the 2009 and 20.51% in the 2013 parliamentary elections. When adding up the votes for the FPÖ with the split-away (but equally anti-immigrant) BZÖ, the 2008 parliamentary elections show an even greater victory of the anti-immigrant far right, winning a combined 27.68% of the vote. This was at the time when, according to Eurobarometer, 61% named high inflation, rather than anything connected to immigration or other ‘classical’ topics of the far-right as the main issue the country needed to face. 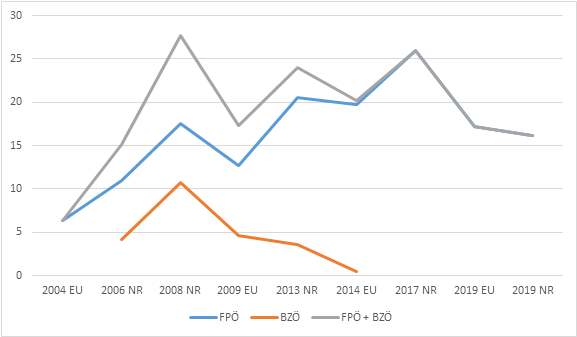 Graph 1: Electoral Results of the Far Right in National (Parliamentary and European) Elections in Austria since 2004

There is no doubt that high salience of the immigration issue can allow the far right to rally support, as was the case in the 2017 election; although it should be noted that the biggest winner, both in absolute numbers and in additionally won votes, was Sebastian Kurz’s People’s Party, which had adopted much of the FPÖ’s rhetoric. However, there is no automatism that would translate a specific salience of the ‘immigration issue’ into votes for the far right or vice versa. I would argue that a high salience of the ‘immigration issue’ also should not be equated with anti-immigrant sentiments. It should raise the political question of how to respond to a specific situation, meaning that – at least in theory – such high salience could also strengthen parties with a pro-immigrant political program.

Conceptualizing the FPÖ primarily as an anti-immigrant party is in and by itself not wrong, but fails to recognize the underlying social and economic trends within Austrian society and the dynamics that lead people vote for it. In all recent elections, including the previous one, the Freedom Party gained most of its votes in (semi-)rural areas which had experienced an economic decline in previous years. With a national result of 16.17% of the vote, the FPÖ won only 15.31% in high-income regions (GDP per capita above 37,234 Euro/year) but 19.22% in low-income regions (below 27,735 Euro/year) (see Austrian elections results here). In regions that recently experienced a population decline – generally due to high unemployment – the party won 19.31%. In numerous (post-) industrial regions, such as Upper Styria, which had experienced a notable economic decline over the past decades, votes for the FPÖ were notably higher than in more affluent regions (see here). The Freedom Party also remains by far the strongest party amongst blue collar workers (with 48% of the vote)(see here).

As I have argued elsewhere, the Freedom Party builds on its claim to represent the ‘forgotten’ men (and to a lesser extent women) of Austria. According to opinion polls before the 2016 presidential elections, Freedom Party candidates were commonly perceived to be ‘understanding the problems of people like me’, able to ‘initiate important changes in society’, and as ‘standing against the current political system’. In this context, the ‘immigration issue’ functions – regardless of both actual experiences with immigration and media debate over it, as a code, an almost universal tool of explanation to address other, social or economic, matters. The FPÖ’s response to the housing crisis is to give preference of autochthonous Austrians in public housing, on education, it demands the segregation of non-native German speaking pupils, and the crisis of the welfare system is addressed with measures to prevent the ‘import’ of potential foreign welfare recipients. As the party concentrated for years on defending the interests of the ‘little man’, responding to evident frustrations over the economic and social decline of certain sectors of the Austrian population, it did not need a ‘high salience’ of the ‘immigration issue’ in order to win elections. It could rather benefit from the other parties’ incapability of giving credible responses to pressing social and economic issues. Hence the party’s strong performance already in pre-2015 elections.

Of course, the party’s narrative of defender of the ‘little man’ suffered credibility once it entered the government and implemented harsh attacks on the living- and working-conditions of many of its core voters. Since 2018, the party performed relatively poorly, compared to the parliamentary elections, in all regional elections, gaining between 14.76% (Lower Austria)(see results here) and 22.96% (Carinthia)(see results here). Whereas the government’s neoliberal policies already angered many long-standing supporters (see here and here), the ‘Ibiza’-corruption scandal, and a subsequent spending-scandal just before the election, again massively damaged the image of the party as a fighter for the ‘little man’. Watching the party leader drinking with a supposed Russian oligarch and promising to sell off treasured national goods, and learning of party functionaries’ luxuries lifestyle, subsidized by party funds, undermined the party’s well-groomed image.

I would argue that it was less the reduced salience of the ‘immigration issue’ that led to the Freedom Party’s electoral disaster, but rather that in the context of the government’s policies and the corruption- and spending-scandals, the party’s argument that it could address social and economic grievances by tackling immigration faltered; since fewer people believed that the party had any interest in addressing social and economic issues at all. Indeed, a – remarkably large – core base of voters remained that still considers immigration and supposedly related issue as the primary motivation to vote for a party, but at least in the short run the party had lost significant numbers of voters who would not buy into the ‘defender of the little man’ narrative any longer. However, many of these voters are likely to return to the FPÖ if the other parties continue to fail in addressing their grievances and demands.

In conclusion, I argue that conceptualizing the FPÖ and similar far-right parties in Europe only in the context of immigration, or the salience of the issue, fails to address key underlying social and economic issues. However, these social and economic factors have to be at the center of both the scholarly analysis of the far right’s surge and any political strategy to respond and to counter it.

Dr. Jan Rybak defended his dissertation at the European University Institute’s Department of History and Civilization in July 2019. He is currently a Postdoctoral Research Fellow at the University of York’s Department of Politics.