Women, Leadership and the Media

More women than men graduate with journalism and media degrees each year. Even so, as illustrated by data from the 2015 Global Media Monitoring Project, they are underrepresented everywhere as reporters and even less likely to be seen in the news.

In an executive training seminar led by Ruth Rubio Marin, the EUI’s School of Transnational Governance brought together policy experts, journalists, leading academics, lawyers and other professionals in the field of media to discuss and generate policy recommendations concerning women, leadership and the media. This article reports on some of their conclusions; a fuller discussion can be found in a recently-published policy brief.

Media companies extensively monitor their own content and workplaces for gender balance, but do not routinely publish the data. How can we be sure they are seeking to address imbalances, however, if they do not disclose this information?

Media authorities and monitoring organisations should pressure media companies to publish the results of their gender monitoring. Remedies to gender imbalances should be designed in a way that do not create barriers for other groups (including gender minorities).  Countries that are not fulfilling the international promises they have made should be held accountable.

Participants in the executive training emphasised that female consumers react positively to more, better and less stereotypical media representations of women. Media companies working to obtain greater equality in gender coverage and parity in male/female compensation could reap a competitive advantage when they showcase their improvements. Policy should be wielded to obtain this win-win situation.

Beyond policies, ensuring women’s equal treatment in the media requires a change in culture, and that must happen at every level of media production.

The professionals participating in the training course related how meaningful female representation in the boardroom almost invariably leads to different priorities and ideas for the company. A balanced perspective in the boardroom drives not only more gender-balanced content, but also more equitable treatment of female co-workers. As demonstrated by figures from the European Institute for Gender Equality, however, representation at this level is still piteously low. In public broadcasting organisations across the EU, for example, only 38% of presidents and members of the board/council members are female, and women make up only about 36% of CEOS, executives, and non-executive directors.

As to bottom-up strategies, the participants agreed that male and female media workers should not hold back from ‘workplace activism’, for example speaking up against rhetoric implying that women are to blame for their lesser power and influence.

Some pointed out the potential role of schools in teaching young people to understand how gender socialisation influences their thinking and how gendered media feeds into these stereotypes.

Effective use of quotas

The purpose of quotas is to give qualified women the same opportunities as qualified men. The workforce benefits from efficiency gains and healthy competition for high status positions when quotas are used well. However, in practice quotas are not often used effectively and there is still poor public perception of quotas.

Going back to media boardrooms, our experts point out that only a few positions at the top are really powerful, and it is in these positions (but  not only) that we need to see 50/50 quotas and nothing less. We cannot be satisfied if half of the workforce has access to only 30 or 40 per cent of the decision-making power or representation.

Flexibility could be, and must be, the norm in journalism. Family-friendly policies are needed to disrupt the ‘mummy track’ on which aspirations for top-level media careers are often derailed.

These policies should be framed in terms that highlight how they benefit and affect both women and men. Media companies should be incentivised to institute parental leave policies that give men and women the equal opportunity to take time for care-giving over the course of their careers.

Objectors to policies ensuring better representation of women in media often argue that these could violate the right to freedom of expression.

However, as our law and media experts point out, plurality of sources is a key element for good journalism, making gender equal representation a necessary priority. Furthermore, not representing women’s voices equally with men’s in news coverage, and not actively seeking both sides of the story is likewise a violation of women’s right to freedom of expression. 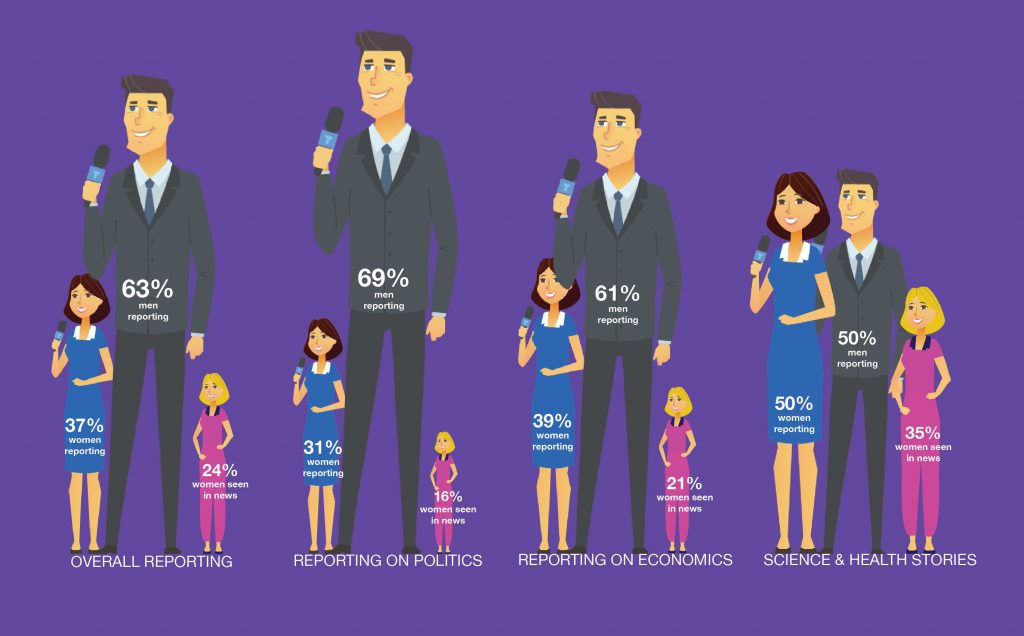 An area where participants keenly notice a gender imbalance is the use of expert opinion. Female experts are not sought out as often as male experts. While there are dedicated lists of female experts, these lists are limited and unevenly shared. Journalists, as part of their training, should be made aware with specific gender training of the necessity of working towards greater equality in media representation.

The lawyers, journalists, academics, policy makers and other media professionals in the STG executive training course identified specific actors that can make a difference in addressing gender imbalance in reporting and representation. Who are they?

Trade unions representing media workers have an impact on how seriously women’s issues are taken, and need to bring gender equality to the forefront. As touched on above, journalism schools can incorporate gender awareness into their curriculums. Academics and think tanks have a responsibility to disseminate their research to media creators. Media monitoring organisations can produce data on media, but also educate the media on strategies to improve gender balance in their transmissions and publications. Global institutions can encourage gender empowerment in the everyday environment by recruiting top-level personnel to the cause, such as the  UN Gender Champions project.  While it is difficult to advocate government intervention in the media everywhere, especially in countries where media freedom is already tenuous, there could be public efforts to diminish the impact of advertisers, which participants agreed have disproportionate influence on mainstream media and can be counter-productive for gender equality.  Public service media, at the least, could be a guide for implementing better gender practices. Finally, feminist media houses, specialised in equal gender representation, can be held up as an example for other media houses.

We cannot accept the abnormal as normal, and it is not normal to represent half the population as though they are a minority group. Small changes can add up when they are company or institution-wide, leading to structural changes. Men must be partners in this work and media must embrace its role in transforming culture and challenging biases.

Amanda Harraldson is a Ph.D. candidate in the EUI’s Department of Political and Social Sciences. Her research deals with the relationship between media sexism and female under-representation in politics.

Ruth Rubio Marín is Professor of Constitutional Law at the University of Seville, and part-time professor at the EUI’s School of Transnational Governance.

Benedita Menezes Queiroz is Guest Assistant Professor at Universidade Católica Portuguesa, Faculdade de Direito, Escola do Porto. She finished her Ph.D. in Law at the EUI in 2015.