Waking up to social Europe

Despite the fact that voters care a great deal about issues such as unemployment, health and social security, and their own personal economic situation, the most salient issues in the European Parliament elections in May were immigration and climate change.  We argue that this is a missed opportunity for pro-European political parties, and especially for mainstream Social Democratic and Christian Democratic ones.

The European elections electoral results clearly showed the importance of ‘issue competition’. Green parties successfully emphasized environmental issues and were rewarded by their best electoral results not only in European elections, but also in many cases in national results. Far right parties kept the focus on immigration, and did well on this issue, improving their standings from the last EU elections, although not as greatly as had been predicted in some countries.

The result of the YouGov EUI State of the Union 2019 poll which was conducted online between the 18th  and the 24th of April in 12 countries (Great Britain, Denmark, Finland, France, Germany, Greece, Italy, Lithuania, Poland, Romania, Spain and Sweden ) is quite instructive in this regard. As late as the 24th of April, 40% of respondents overall viewed immigration as one of the two most important issues for Europe.  Terrorism came second (26.5%) and the environment third (21.4%).

It appears that in the last month of campaigning, Green parties succeeded in raising the salience of environmental issues. This not only helped those parties, but also was favorable for pro-European parties, because according to our survey, the level of trust in the EU to improve the situation in this policy area is much higher than for immigration.  By contrast, both EU and national governments seem to be credited with high competence in fighting terrorism.

A disconnect between parties and voters

Respondents to the YOUGOV survey rated immigration, terrorism and protecting the environment as the most important issues for the EU and national governments. However, the data also illustrate that for respondents personally, their own personal economic situation (25.6%), health and social security (19.7%), and unemployment (11.9%) are more important issues than immigration, terrorism, and even the environment.

Left and center parties, however, failed in their efforts to emphasize welfare state and social policies as electoral issues, even though respondents regard both the EU and their national governments as being highly competent to address these problems. 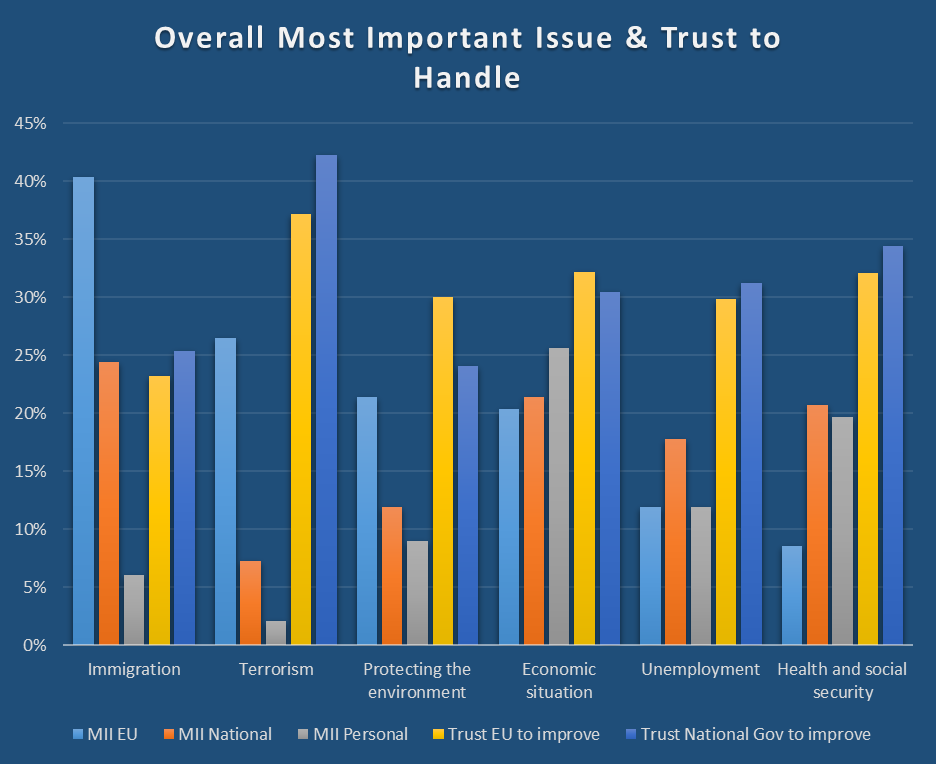 The European Commission led by Jean-Claude Juncker has launched a focus on Social Europe and introduced the European Pillar of Social Rights. But as of late April 2019, this message has not gotten through to European publics: only 8.6% saw health and social security as being an important problem at the European level. The limited attention to welfare state issues at the European level would appear to be an untapped opportunity for both center left and center right parties, as the high level of trust in Europe for health and social security issues cuts across all levels of education. 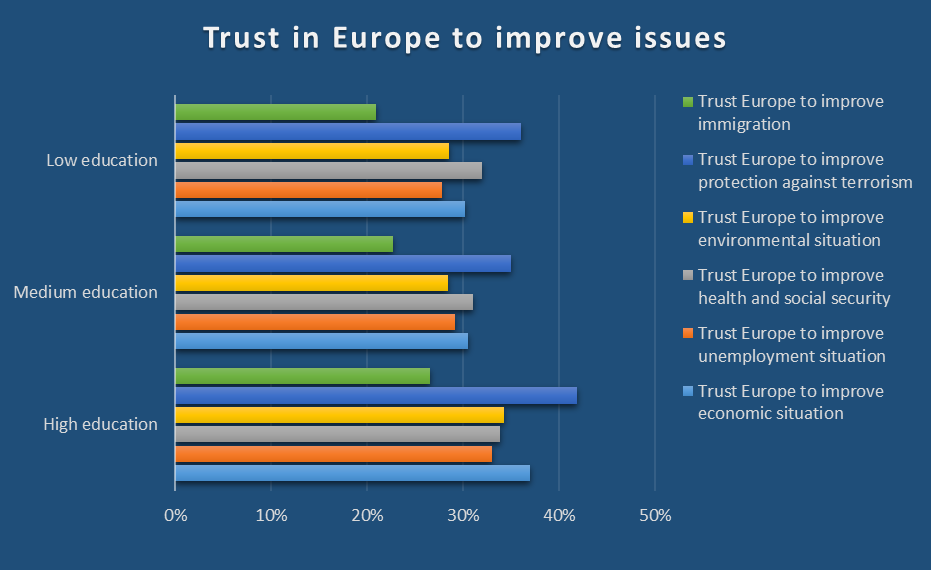 The untapped opportunity also becomes evident when also looking at the factors behind people’s vote choice for the European elections. 76.1% of the respondents felt that a fairly or very important factor was choosing the party which best reflects their views, while 73% felt the same with regard to the parties’ European policies. Thus, there is some reason to believe that people did expect parties to compete on the issues, European or otherwise, that mattered to them and that they judged parties based on this criterion, even though the governments’ national performance was also taken into account by most people (72.2%).

A similar conclusion can be drawn when splitting the sample by the most important European issue and looking at the factors behind voting decisions for each group. Voting criteria are similar for all respondents, regardless of which European issue they were concerned with.  It is worth mentioning that between 75% and 80% of people concerned with health and social security, unemployment or the economic situation, also considered important voting for a party that would reflect their views and judging parties on the basis of the European policies they put forth.

Thus, the plan for social Europe has high potential as a European election topic, but the European Union has not yet developed policy proposals in this area that are salient and visible to the voting public. It will be interesting to see how these values change in the next year, when the YouGov SOU 2020 will go out to the field!

Ellen Immergut is Professor of Political Science in the Department of Political and Social Sciences at the EUI.  She is Scientific Programme Coordinator for the transnational research programme Welfare State Futures (WSF), launched by the New Opportunities for Research Funding Agency Co-operation in Europe (NORFACE). Immergut presented the YOUGOV data at Soiree Européene, on the event of the European elections, representing the EUI within the CIVICA consortium.

Andra Roescu is a Max Weber Fellow at the EUI and her area of research focuses on social policy and voting behavior.