“I don’t believe it is justice to the young generation when our rivers and lakes are polluted, when big polluters are untouchable, when world leaders choose profits over lives,” said Ugandan climate activist Lea Namugerwa at the opening of the 27th Conference of the Parties to the United Nations Framework Convention on Climate Change (COP27) in Sharm El Sheikh, Egypt.

While previous COPs centred on setting shared goals and stepping up ambitions, this year’s edition of the conference can no longer ignore the distributional questions that lie at the heart of the climate agenda. Who is to shoulder the burden of climate impacts and the onus of stringent, expensive climate action? Who benefits from such policies?

Questions about distribution are questions of justice. In this sense, COP27 may be viewed as the long-awaited ‘justice’-COP. But what exactly does climate justice demand from us? Debates have moved along two dimensions: spatial and temporal.

In the spatial understanding, climate justice is about breaking up the persistent colonial logic, under which benefits accrue to wealthy elites (most of them in the Global North), while harms fall onto already vulnerable populations who have contributed the least to the problem from an historical perspective. This unfair imbalance explains why topics such as reparations for loss and damage and stepping up climate finance have been at the forefront of COP27 debates thus far.

Apart from spatial distributions, time is of essence, too. Climate change has been unfolding over more than a century. It will likely continue to create impacts for many centuries to come. As a result, climate action involves unique trade-offs between current and future generations. COP27 is not only tasked with distributing harms and benefits among different pockets of the global population currently alive (intragenerational justice); it must also consider when and by which generation such harms and benefits will be shouldered (intergenerational justice).

Questions about justice are first and foremost political questions, but they unfold against the backdrop of a dense normative landscape. Moral philosophers have long argued that generations should not be discriminated against merely by virtue of their position along the arc of time.

Future generations in the courthouse

Although concern for the wellbeing of succeeding generations has a decade-long history in international law, the principle of intergenerational equity was long belittled as fancy language with little practical impact. This picture is beginning to change.

While international legal practice is still scarce, attention has shifted to the intergenerational language found within national constitutions across the globe. Within the last decade, governmental inaction on climate change has triggered a wave of litigation in national courts. In pursuit of legal arguments to support these cases, litigants and courts have rediscovered the international principle and its constitutional offspring.

The table below compares ten climate lawsuits before national, regional, and international bodies that have dealt with the protection of future generations in one way or another. These cases not only indicate that courts are increasingly willing to deal with intergenerational claims. They also show that judges are making significant strides in developing the representation of future generations, the operationalisation of intergenerational rights and duties, and the crafting of creative remedies to address some of the imbalances brought before them. 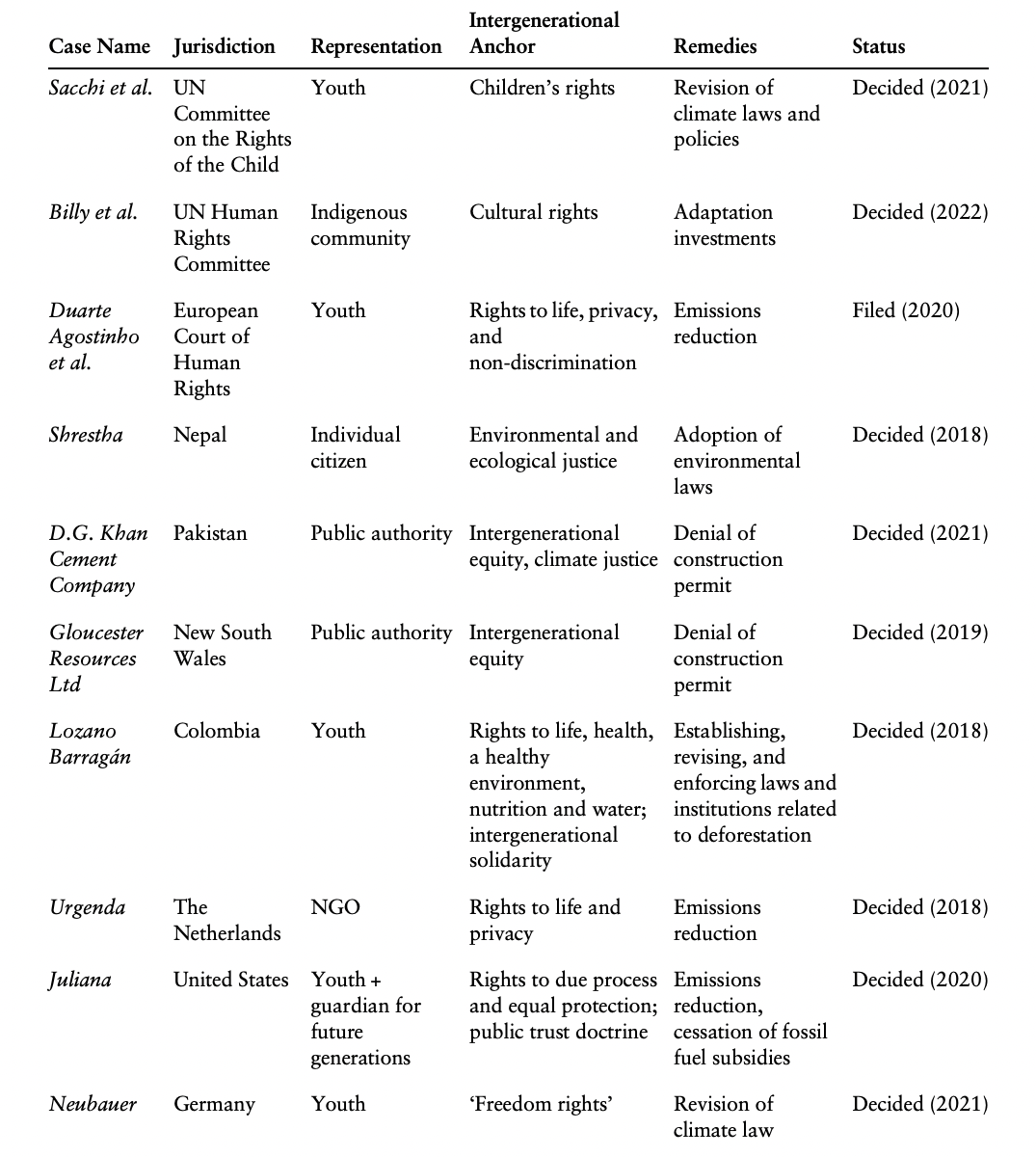 Table: Selected intergenerational climate lawsuits decided or filed within the past five years.
Source: Bertram, D. (2022). ‘For You Will (Still) Be Here Tomorrow’: The Many Lives of Intergenerational Equity. Transnational Environmental Law.

Who is the future?

Advances in the legal protection of future generations’ interests cannot hide the fact that many thorny questions remain unsolved. For instance, most lawsuits so far have failed to specify who exactly is included in the class of protected persons. Two main issues arise here. First, why should protection be limited to future generations of humans only? A growing number of jurisdictions recognise the rights and interests of natural entities such as rivers, animals, or ecosystems. If we are to take intergenerational equity seriously, we must include these subjects within the scope of protected future interests. This proposition could produce a radically more ambitious legal agenda than an exclusive focus on human beneficiaries.

Second, national courts may be tempted to restrict protection to their own (future) citizens. This ‘future-nationalism’ is understandable, given the grip of the nation-state system on our system of political organisation, but it is ultimately mistaken. As a matter of historical fact, the boundaries and existence of nation-states are far from set in stone. No one knows which politico-legal system future generations will inhabit, but it is rather unlikely that it will be the same as today.

Future generations are the invisible stakeholders of COP27. Many of those impacted by decisions taken in Sharm El Sheikh are yet to be born, and even the most proximate generations of current youth and children face huge access barriers to participating in COP. Taking the interests of future generations on board is not only a moral, but also a legal obligation.

Daniel Bertram is a PhD candidate in Law at the European University Institute. His research on environmental governance and justice has appeared in Transnational Environmental Law,  Global Environmental Politics and German Law Journal.