Completion of the transportation network from the Port of Bar to Bolhare in Serbia would give China additional entry to European markets. Photo by Alex Alishevskikh (CCbySA2) via wikipedia.

Infrastructure networks in the Western Balkans: A tug-of-war between EU and China?

In mid-April, the European Commission denied the government of Montenegro’s request for financial assistance to repay a €688 million loan (almost €830 million, including the 2% interest rate) taken out from China’s Export-Import (EXIM) Bank. The loan agreement dates back to 2014 and relates to the unfinished Bar – Boljare highway that will cross Montenegro from the Adriatic sea to the border with Serbia.

Brussels’ decision not to help Podgorica repay the loan, which amounts to almost a quarter of its overall government debt, has been criticised for lacking a strategic perspective for the region. It is, however, linked to a broader discussion on the EU’s stance vis à vis China’s increasing economic presence in the Western Balkans.

China’s economic involvement in the region: an infrastructure financing power?

Beijing has pursued a policy of increasing economic involvement in the Western Balkans (WB) during the last decade (with the exception of Kosovo, which the Chinese do not recognise as an independent state). This policy takes the shape either of strengthening bilateral ties with the countries of the region or of multilateral cooperation in the framework of the Belt and Road Initiative – BRI (China’s strategic vision for an interconnected economic community across a set of six corridors) and the 17+1 regional mechanism (which includes China plus 17 countries of Central and Eastern Europe – 12 EU member states and 5 WB countries).

Although China’s enhanced economic ties with the region have drawn international attention, the truth is that in terms of investment (FDI) and trade its share in the markets of the WB countries remains rather low. Serbia, which has established a comprehensive strategic partnership with China since 2019, seems to be the favoured regional destination for the Chinese capital, but still the share of Chinese FDI remains well below 10%.

The more worrying aspect of China’s economic involvement in the Western Balkans relates to loans, and, more precisely to infrastructure lending. Apart from EXIM Bank’s loan to Montenegro, North Macedonia also has a significant debt exposure to China as a result of the €714 million loan for the Miladinovci – Štip and Kičevo – Ohrid highways, while Serbia has borrowed approximately €1.7 billion for transport and energy infrastructure. 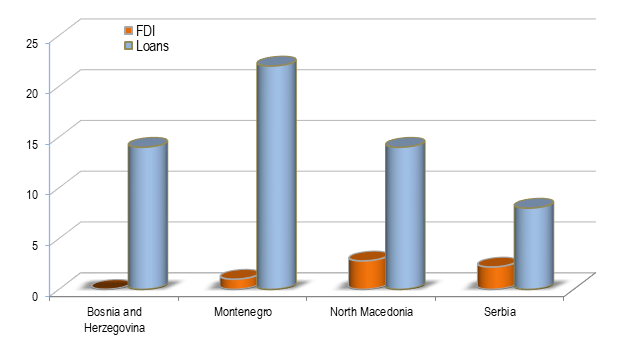 The growing debt dependence of the Western Balkan economies on China raises concerns not only about the soundness of public finance, but also about their vulnerability to Beijing’ s political influence.

Beijing insists, however, that its economic and technical involvement in the region is based on the principle of non-interference in domestic politics. Its policy in the Western Balkans seems to be primarily oriented towards serving the China-Europe Land-Sea Express Route (LSER) initiative. The LSER entails the construction of a transport network which would facilitate the access of Chinese products entering the Port of Piraeus in Greece (the Chinese state-owned COSCO has a 51 per cent stake in the Port) to the Central and West European markets.

The Commission has stated explicitly that China’s economic activity in the Western Balkans often disregards socioeconomic and financial sustainability, compromising ‘efforts to promote good social and economic governance and, most fundamentally, the rule of law and human rights’.

From the EU’s perspective, the Chinese narrative of non-interference appears to have limits. Chinese financial institutions and construction companies function largely as proxies of the Chinese state in the Western Balkans. Through their direct relations with the government elites, they operate beyond regulation and free of competition from other financial institutions and construction companies.

This state-to-state arrangement of financing and contract awards deviates from the EU model of transparent bidding procedures. The direct award of infrastructure projects, at a political level, generates a direct connection between financial and development elites in China and government elites in the Western Balkan countries, creating the conditions for the politicisation of infrastructure loans.

As a result, although China, up to now, has not tried to interfere (at least directly) in the internal political and social life of these countries, or to exert influence on foreign policy making, it does get involved in domestic politics through its policy of ‘tied loans’.

Infrastructure such as energy and transport networks can function as policy instruments for the promotion of regional integration in the Western Balkans, but they can also be used as tools serving private economic and/ or political interests. This depends on the political rationality (or irrationality) and the administrative practices of public and private actors involved. It has also to do, at a normative level, with the existing political culture and societal attitudes towards political and financial misconduct by those in power.

China has established its presence in the Western Balkans, primarily, as an alternative source of financing or even as a lender of last resort for infrastructure projects, which have not been approved for financing from EU sources.

The EU has, however, a key interest in ensuring that the values of good governance will be reinforced in the Western Balkans and that the countries of the region stay on the path to EU accession. This stance has been reaffirmed by the launch of the EU Economic and Investment Plan for the Western Balkans in October 2020.

What can be done?

First, the EU needs to enhance the resilience of its Western Balkan neighbours, which have an essential role to play in the global value chains that supply its markets. Although the Western Balkan countries cannot participate in the EU FDI screening cooperation mechanism activated in October 2020, they could be encouraged to establish their own national FDI screening mechanisms. That would of course require  a transfer of expertise and financial assistance from the EU.

Second, the EU should work to create a positive agenda. Beijing’s policy in the Western Balkans is not meant to hinder their accession to the EU (although that may be an unintended adverse effect). In fact, EU integration in the region could facilitate the implementation of China’s LSER initiative and its access to the EU markets. Starting from this premise, the launch of a positive agenda for EU-China cooperation in the Western Balkans seems to be feasible. The EU-China Connectivity Platform could function as a useful initial framework of cooperation for the development of synergies between BRI and the extended Transeuropean Transport Network (TEN-T) in the Western Balkans.

Third, the EU should take on capacity building to safeguard against political instrumentalisation of infrastructure. Insufficient local capacity to plan, absorb available funds and implement infrastructure projects is an inherent weakness of the Western Balkans. This deficit leaves room for the increased political instrumentalisation of projects, and often leads to unsustainable financing, direct award of contracts and unreliable implementation. In order to counter this situation the EU needs to invest more in efficient recruitment and retention policies for local experts dealing with the planning and execution of infrastructure projects. Investing in expertise and capacity building won’t automatically extinguish these deficiencies, but it could discourage the exploitation of public infrastructure for private political and/ or economic interests.

Michael Charokopos is a Policy Leader Fellow at the School of Transnational Governance, European University Institute. His work focuses on energy and transport networks, Balkan politics and society.