We all know who Greta Thunberg is, but do you know who Vanessa Nakate is? Last year in January, Nakate, founder of Fridays for Future Uganda, was famously cropped out of a photo of young climate activists at the G20 summit. Nakate’s response was clear; this wasn’t just the erasure of a photo, it was the erasure of an entire continent, and illustrative of inequalities that are embedded in the transnational climate movement. So how can we start to reflect on these inequalities? And what can we do to address them? 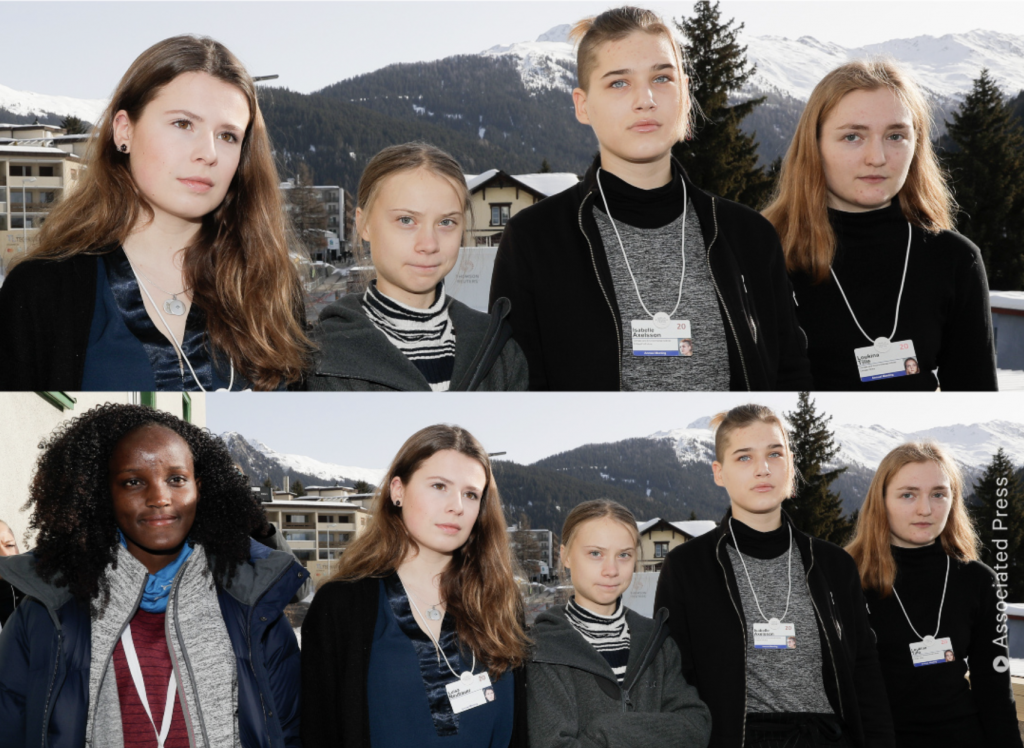 A comparison of the cropped photo published by the AP with the original photo, which included Vanessa Nakate alongside other young climate activists at the G20 Summit in Davos (January 2020). Photo source: Earth Island Journal

In recent years, the transnational mobilisation of activists fighting for climate justice has gained significant ground. Those at the forefront of these movements are young people, who hold a unique moral and ethical claim on the future as the group who will be most impacted by climate change. However, despite 50% of the global population being under the age of 30, young people continue to be marginalised from decision making and have the least say regarding their own futures. No wonder, when young people under 30 represent just 2.2% of MPs worldwide, and the average age of MPs globally is 53 years old.

Arguably, the recent mobilisations of young people taking to the streets to fight for climate action illustrates a stark disconnection between established political institutions (and elite politicians), and the realities of young people’s lives. This particularly includes young people in the global south who are currently living the impact of climate change, and who will be disproportionately affected by it. Young people’s voices are vital to ensure that action on climate change is sustainable and decision making is intergenerational.

Therefore, considering why voices are marginalised, and examining the structural barriers to participation, is a necessary step to increase the diversity of voices in the transnational climate justice movement. We need to be asking why is it that a movement that generally tries to put equality at its centre is ridden with inequalities? What can we do to ensure that no one gets left behind?

As a starting point, intersectionality must be at the centre of how we think through issues of inequality. We need to understand how people (and particularly young people) may face multiple oppressions (such as discrimination based on race, gender, sexuality, disability etc.), and the interplay of these in lived experience. We also need to recognise that climate change is a transnational issue, which requires a transnational solution. This necessitates working across borders and collectively, with diverse groups and voices. Perhaps most importantly, we need to actively work to deconstruct power structures between the global south and the global north. These inequalities are a legacy of colonialism, founded on the exploitation of the environment, people, culture, and resources, under the pretext of ‘development’ and a so called ‘civilising mission’. The legacy of colonial regimes helps to explain why young people in the global south remain marginalised in the transnational climate movement, and the barriers to participation that they face, such as lack of access to resources, repressive laws and dangerous political landscapes.

You only need to look at former colonised countries to find that laws from the colonial era serve to restrict civic space and obstruct the mobilisation of young activists. For example, the Sedition Provision, Section 124A of the Indian Penal Code, which was drafted by British colonial rulers in 1870. The act punishes (up to life imprisonment without bail) anyone seen to “excite, or attempt to excite feelings of disaffection against the government”. Despite being implemented over a century ago, the Indian government continues to use it to suppress freedom of speech and association. A well-known recent example was the use of the Sedition Provision to charge thousands of protestors, particularly students, opposing the Citizen Amendment Act (passed December 2019) for further marginalising religious minorities.

Similar colonial laws are actively being used to suppress peaceful protest in a number of former colonies, such as Kenya, Pakistan, and Hong Kong, amongst others. There are significant differences between the realities for activists in the global south as opposed to the global north, where white western activists can safely and securely protest without threats to their lives. While Greta is a huge inspiration to us all, it’s important that we think about why voices like hers, or the other white activists standing alongside her, are louder. Why do others, who could also resonate with millions, get lost in the media echochamber?

How do we go about centering these voices? We must start by elevating the voices of young environmental activists in the global south. Here are some necessary steps to forefront young global south voices in the climate movement:

These suggestions come directly from activists from green political youth organisations, who are working on setting up a young, transnational, global south-led climate justice network. This is not an exhaustive list, but rather, an opportunity to forefront the voices and viewpoints of those we do not regularly hear from, and to reflect upon the action we need to take. It is clear that the climate movement needs to address embedded inequalities, and work to amplify the voices of those who are most marginalised via affirmative action and redistributive policies. Young people should not have to pay the price for decisions made by others. If the transnational climate movement does not empower and include the young generations from the global south, our vision for a sustainable and socially just future will remain a distant aspiration, and we will continue to be dictated by old, extractivist and tokenising hierarchies.

Alice Hubbard is a Policy Leader Fellow at the European University Institute in Florence, and currently sits on the Global Young Greens Oversight Committee. She has held elected roles as Secretary of Global Young Greens, and International Coordinator of the Green Party of England and Wales.

This article was previously published in Bright Green on 08 January 2021.