Don’t blame the voter (too much)

We often hear that solidarity is low in the EU allegedly because voters are Eurosceptic and distrustful. Is this true? Is it the voters’ fault that EU finance ministers can’t agree on debt mutualisation in EMU or that every arrival of a rescue vessel with refugees on board leads to protracted haggling among EU member states?

In a 2018 YouGov survey, a broadly representative sample of citizens in 11 EU member states were asked about their attitudes towards European solidarity. Would they support or oppose financial or military assistance to member states suffering from either unsustainable debt, or high unemployment, large inflows of refugees, natural disaster, or military attack? Figure 1 summarizes the answers.

Figure 1: Support for EU solidarity across different types of crises 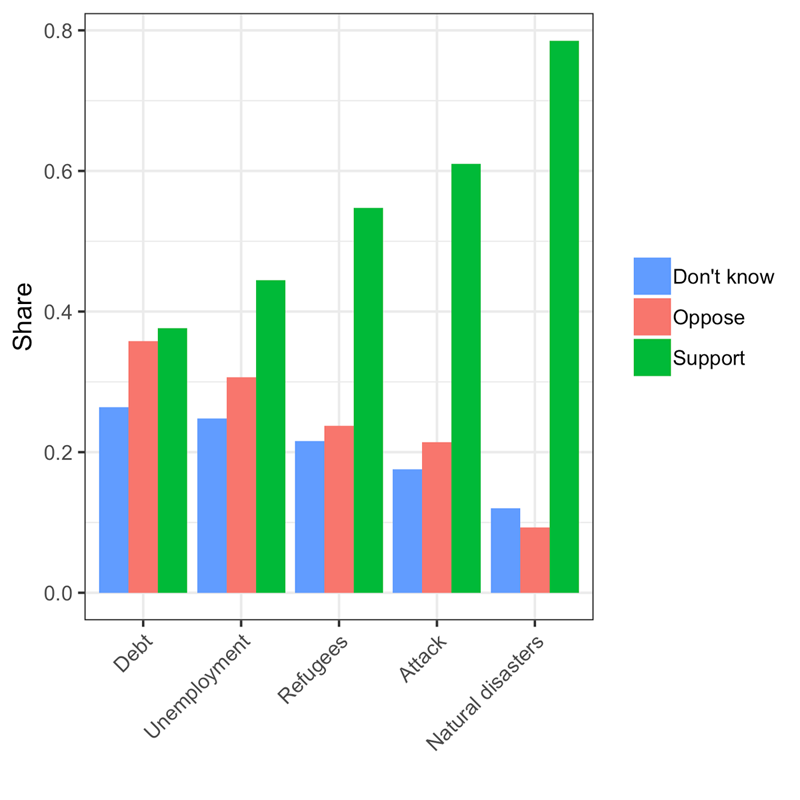 The good news is that support for solidarity is generally higher than opposition. On average, only a minority of people oppose transnational solidarity in the EU. The bad news is that the level of support varies greatly, depending on the issue.

Support is highest for issues of little concern, such as natural disasters (thus far mostly manageable on a national level) and military attacks (a core competence of NATO, not the EU). Conversely, support for solidarity is lowest for two of the issues that are central to the EU’s Single Market and monetary union – debt and unemployment. An exception is support for solidarity for refugee assistance, a highly policy-relevant issue where we observe robust support.

Interestingly, where we see low support for solidarity we also find a strong association with uncertainty: a sizeable number of respondents simply ‘don’t know’ whether solidarity with over-indebted or high-unemployment member states is a good or a bad thing. Their uncertainty opens space for political leadership, and their position on solidarity may be swayed by arguments (or demagogy) in public discourse.

Do the European averages reported in figure 1 hide cross-national differences? Partly they do.

As figure 2(a) shows, the net average support (i.e. support minus opposition and disregarding ‘don’t knows’) for solidarity on debt relief varies greatly between respondents from northwestern and southeastern member states.

While a majority in the former country group rejects financial assistance to over-indebted member states (negative net-support), presumably because they expect that their own home country will have to pay for it, a majority in the latter supports solidarity, presumably because they expect their own home country to be at the receiving end.

Figure 2(a): Variation in support for debt relief 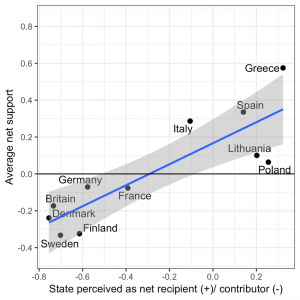 A similar northwest – southeast divide emerges with respect to the unemployment issue (not shown). Yet, we find no such divide with respect to other issues. Perhaps most importantly, attitudes towards solidarity on the refugee issue are essentially unrelated to respondents’ perception of the gains/burdens implied for their home country. Average net-support is positive in all member states, including Poland and Lithuania (see figure 2(b).

In sum, voters can be an obstacle to European solidarity: when it comes to debt relief, it may be that whatever level of transnational solidarity the EU chooses, it is too high for the median voter in creditor countries and too low for the median voter in debtor countries. That’s the bad news. The good news is that there is much less cross-country variation in support for solidarity on other issues. Perhaps most importantly, there is fairly robust support across all member states for financial solidarity on the refugee issue.

Figure 2(b): Most people in surveyed countries support EU solidarity 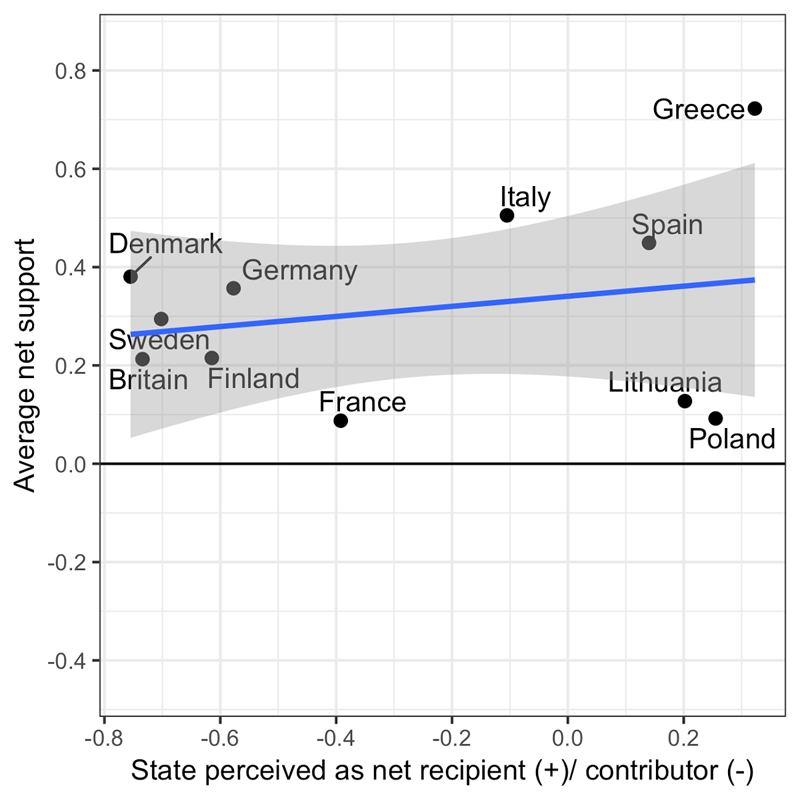 Political minorities with intense preferences often have a larger impact on democratic politics than apathetic median voters. Hence, we compare attitudes towards solidarity of voters of radical populist right wing parties (RPR) against those of other voters, on five issues.

Unsurprisingly, right wing voters tend to support European solidarity less than other voters. However, the size of this ‘support-gap’ varies greatly by issue. While it is very large for the refugee issue, it is much smaller for the other issues. Right wingers are clearly more xenophobic than other voters. But in other respects, their preferences are not so extreme. Their support for military solidarity and solidarity with the victims of natural disasters is positive and high, and almost at the level of other voters. You probably can’t win right wingers over to more refugee solidarity. But on other issues it may not be hopeless.

Would the elites please go ahead

Public attitudes towards European solidarity are complex, but there is no general opposition to pro-solidarity policies. Indeed, there is generally more support than not for solidarity.

On some issues, however, we observe selective opposition in some countries, and by some voters. The strongest resistance comes from those who fear having to pay the bill for solidarity (respondents in northwestern countries regarding financial assistance for debt or unemployment relief) and those who dislike refugees (right-wing voters). Yet in the former case, dissent is tempered by uncertainty. In the latter case, opposition is a minority concern.

These findings suggest there is room for political leadership to take a pro-solidarity stance.  EU elites should go ahead and pursue it. While the electoral risks from intense nationalist minorities are obvious, stalling is also risky. Large majorities are pro-EU and want to see the EU thrive. If this requires more European solidarity, it may be worth sharing the message. These uncertain voters can be convinced about the need for high solidarity, and may actually support parties that promise to increase it.

Professor Philipp Genschel is Joint Chair Professor of Comparative and European Public Policy in the EUI’s Department of Political and Social Sciences and at the Robert Schuman Centre.

The author, with Professor Anton Hemerijck, provides a more complete discussion of this analysis in the School of Transnational Governance Policy Brief Solidarity in Europe.  Further reading on solidarity across EU member states will be available in Björn Bremer, Philipp Genschel and Markus Jachtenfuchs ‘Juncker’s curse? Identity, interest and public support for the integration of core state powers’. Journal of Common Market Studies (forthcoming 2019).