Lead candidates Guy Verhofstadt, Manfred Weber, Ska Keller and Frans Timmermans prior to the 2 May Spitzenkandidaten Debate at the European University Institute. (Photo by Marco Benvenuti)

How (not) to take into account the European elections: The open future of an incomplete system

The European Council’s surprise package of names for the top posts at three EU institutions and the Foreign Service is the result of a new balance of powers, in the Parliament and elsewhere. The European Parliament has to decide, not for the first time, whether it will only bark or also bite. Past experience in similar situations concerning appointments or consent procedures has shown that, with growing influence, Parliament´s responsibility beyond its immediate own interests also grows. It is likely that Ursula von der Leyen will be the next Commission President.

The new situation reflects more fundamental political and constitutional tensions. One of these is the weakness of the lead candidate system in its present form. Despite Jean-Claude Juncker’s jibe that he was the first and the last Spitzenkandidat, writing an obituary seems premature. However, the European Council´s compromise solution makes it unlikely that the system can survive unchanged.

During most of the Union’s history the debate on the EU’s democratic deficit focused increasingly on parliamentarisation as a remedy. The synchronisation of the mandate of the Commission with the Parliament´s term, fully achieved from 1999, was an earlier step towards a parliamentary system. Ten years later, the Lisbon Treaty insisted that the Parliament had to elect the new Commission President, instead of just giving its approval (Art. 17(7) TEU).

Presenting candidates for the Commission presidency to the European electorate and giving priority to the party with the strongest result could thus claim to be a logical continuation of prior decisions. However, following up on similar statements made in 2014, the European Council of 23 February 2018 confirmed that there was no automaticity.

This year, some members of the European Council were unsurprisingly again opposed to the model. The decision of French President Macron´s party to join and strengthen Parliament´s liberal group is one part of the explanation. His dislike of the way the EPP deals with Viktor Orbán may be another, in conjunction with the fear that the Spitzenkandidaten could eternally produce a Commission led by Christian Democrats or Conservatives. 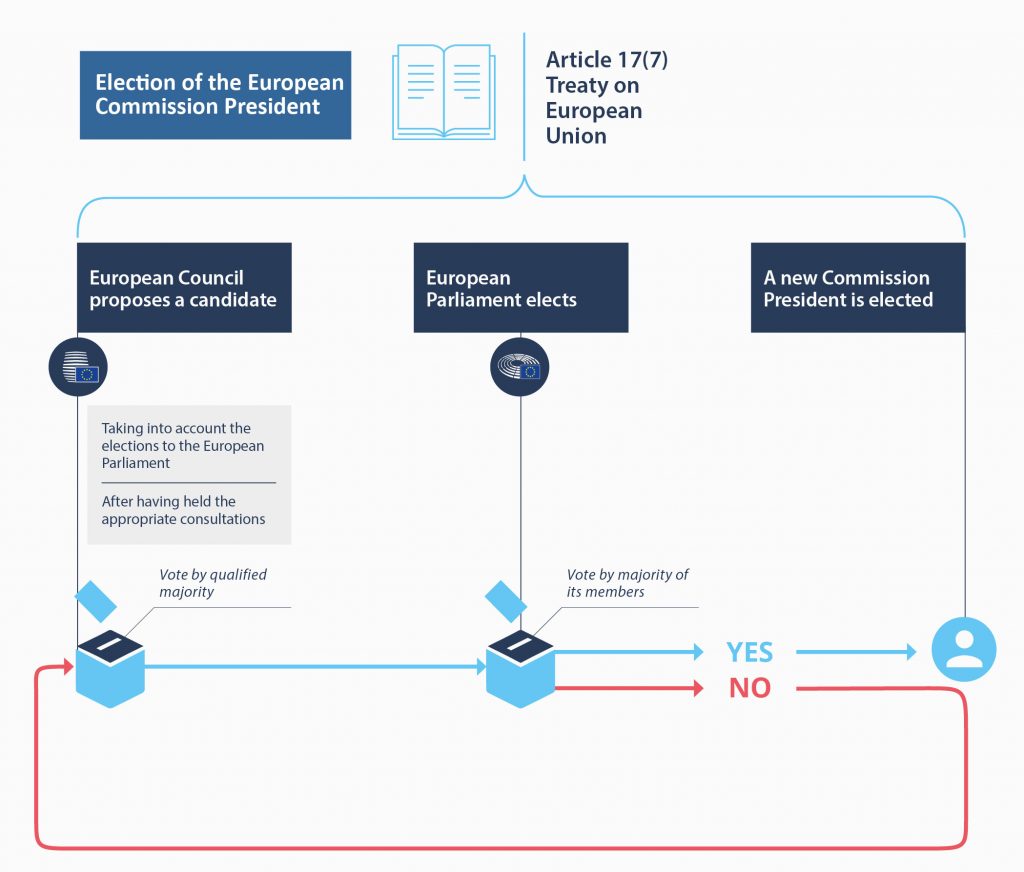 Election of the European Commission President – Infographic by the Council of the EU, 2018

The electoral campaign 2019 showed again that visibility of the lead candidates was very unequal between Member States. They made some difference in their home states and in neighbouring countries. In other parts of the EU they were virtually unheard of. Media coverage overall seems to have remained at more or less the same level as in 2014. Even at home, lead candidates had disappointing name recognition.

The French President argued that there was no statutory base for a binding choice of the number one on the list of the strongest party. Most legal scholars would agree. Constitutionalists remain unconvinced by Parliament´s 2013/2014 interpretation of the TEU. Practice in national parliamentary systems shows that the prerogative of the strongest party may be a lasting political convention but by no means a constitutional imperative.

The European electoral system produces another weakness of the Spitzenkandidaten: they are at the top of national electoral rolls and can only be elected in one particular member state. For reasons hidden away in the internal rules of the CDU/CSU, Manfred Weber´s name did not even appear on German ballots outside Bavaria. Thus only a tiny part of EU citizens could actually vote for Weber, or other lead candidates. This is a rather weak manifestation of the ‘right to participate in the democratic life of the Union’ expressed in Art. 10(3) TEU.

Consequently, Macron pointed out that the lead candidate procedure only makes sense in combination with EU-wide electoral lists. He convinced Chancellor Merkel, at a bilateral summit in Meseberg in June 2018, to go for transnational lists for the European elections as of 2024. The leadership of several political groups in the Parliament have recently renewed their commitment to pursue the experiment.

In February 2018, the EPP group had mainly been responsible for Parliament´s refusal to include transnational lists in its proposal for an amendment of the Electoral Act. The other groups, with the exception of the Eurosceptics, had been in favour of a Europe-wide constituency. After the elections, the EPP came out as the strongest party and, with reference to the lead candidate process, claimed the presidency of the European Commission.

With Manfred Weber´s chances increasingly slim, Angela Merkel sent signals to the European Parliament and to the European Council that the question of transnational lists could be taken up once more as a ‘logical step’ to improve the lead candidate model. The candidate for Commission president nominated by the European Council, Ursula von der Leyen, also expressed her intention, once elected, to submit proposals to this effect.

In the new parliament, only 40% of MEPs have been re-elected. The share of Eurosceptic groups has increased, albeit less dramatically than forecast during the campaign. A few transnational parties have surmounted national registration requirements, one of them (Volt) is now represented in the Parliament with one seat. Although these tiny groupings still struggle to become viable structures they could one day inject new life into party competition at the European level.

The German signifier Spitzenkandidaten has been used to label the lead candidate principle all across Europe. This reminds us that the Federal Republic and other countries with similar constitutional arrangements (a parliamentary fusion of powers system and proportional representation) have taken to the idea with particular verve. On the other hand, courts and historians often maintain that the EP – Spitzenkandidaten or not – cannot rival national parliaments as a source of popular legitimacy because its electoral procedure deviates too much from the ‘One person – one vote’ principle.

Incidentally, a Europe-wide constituency would improve electoral equality. Votes for these lists would have equal weight everywhere. The flipside of the coin is that transnational lists might lead to even greater hegemony of the big Member States. Compensatory measures such as regionalised electoral thresholds or appropriate party registration rules would probably be required to avoid such overweening influence.

The fact remains, nonetheless, that lead candidates winning a plurality of votes from across all Member States would enjoy real popular legitimacy. This would go some way to take the treaty prescription more seriously that EU citizens are ‘directly represented at Union level in the European Parliament’ (Art. 10 TEU).

Wilhelm Lehmann is Visiting Fellow at the Robert Schuman Centre for Advanced Studies and Adviser at DG European Parliamentary Research Service of the European Parliament. His research interests are in electoral reform and political representation beyond the nation state. He recently co-authored a paper on Parliament´s role in the Brexit negotiations. The analysis and opinions expressed here are the views of the author alone.